The Decca Tree | The Secrets Behind The Legendary Recording Technique

That’s how sound engineer Arthur Haddy started the history of the most beloved classical and film orchestra recording technique. We are, of course, talking about the “Decca Tree”.

The Decca Tree is an array of between three and five microphones that provides a well balanced and mono-compatible stereo recording. It was devised and assembled for the first time in 1954 by Decca Recording Company´s engineers Roy Wallace and Arthur Haddy. The first version of the Tree consisted of a suspended T-shaped steel array, bolting 3 Neumann M49 microphones to each end, above the conductor’s podium. Hence the phrase coined by Arthur when they place the array in position.

The Decca Tree became a success very quickly and revolutionized the orchestra recording with the warmth and spaciousness of the resulting stereo sound.

In the following years, engineer Kenneth Wilkinson refined the technique by using the omnidirectional Neumann M50 microphone for the Tree instead of M49. He also added 2 outriggers to the setup, creating the 5 microphone Decca Tree array. All these augmented the recordings by giving them a more natural ambience without losing any of the other qualities.

At first glance, the M50 could look like a regular large diaphragm microphone, but don’t be deceived by its looks. Underneath the microphone grille lives a pressure operated microphone. It has a small diaphragm mounted on the surface of a sphere that is larger than the diaphragm itself. This has some particular effects on sounds approaching from different directions, making the M50 more directional above 1 kHz, which offers advantages over purely omnidirectional microphones creating a clearer stereo imaging.

This characteristic together with the extended bass response and high-frequency boost of the M50, makes it the perfect microphone for the Decca Tree.

Where do you locate the decca tree?

The positioning and dimensions of the Decca Tree is something that has been discussed and written about for many years. In reality, to obtain the best result these could vary depending on the venue and the recorded ensemble. However, there is a prescriptive “correct” positioning that allows engineers to move quickly and effectively in a recording session when time is always limited.

The microphones of the main Tree are mounted on the vertices of an isosceles triangle. They are suspended at around 3 metres high over the conductor’s podium. The 2 outriggers, for a 5 microphone setup, should be at the same height as the main tree. They are placed around 3 metres to the left and right of the centre of the triangle.

As we mentioned before, depending on the venue and size of the orchestra the setup can vary between 3, 4 or 5 microphones. It’s rare to see the Tree on its own for a full orchestral recording. Although additional microphones are used for further details of each section of the orchestra, the Decca Tree by itself provides the majority of the final sound of the recording. 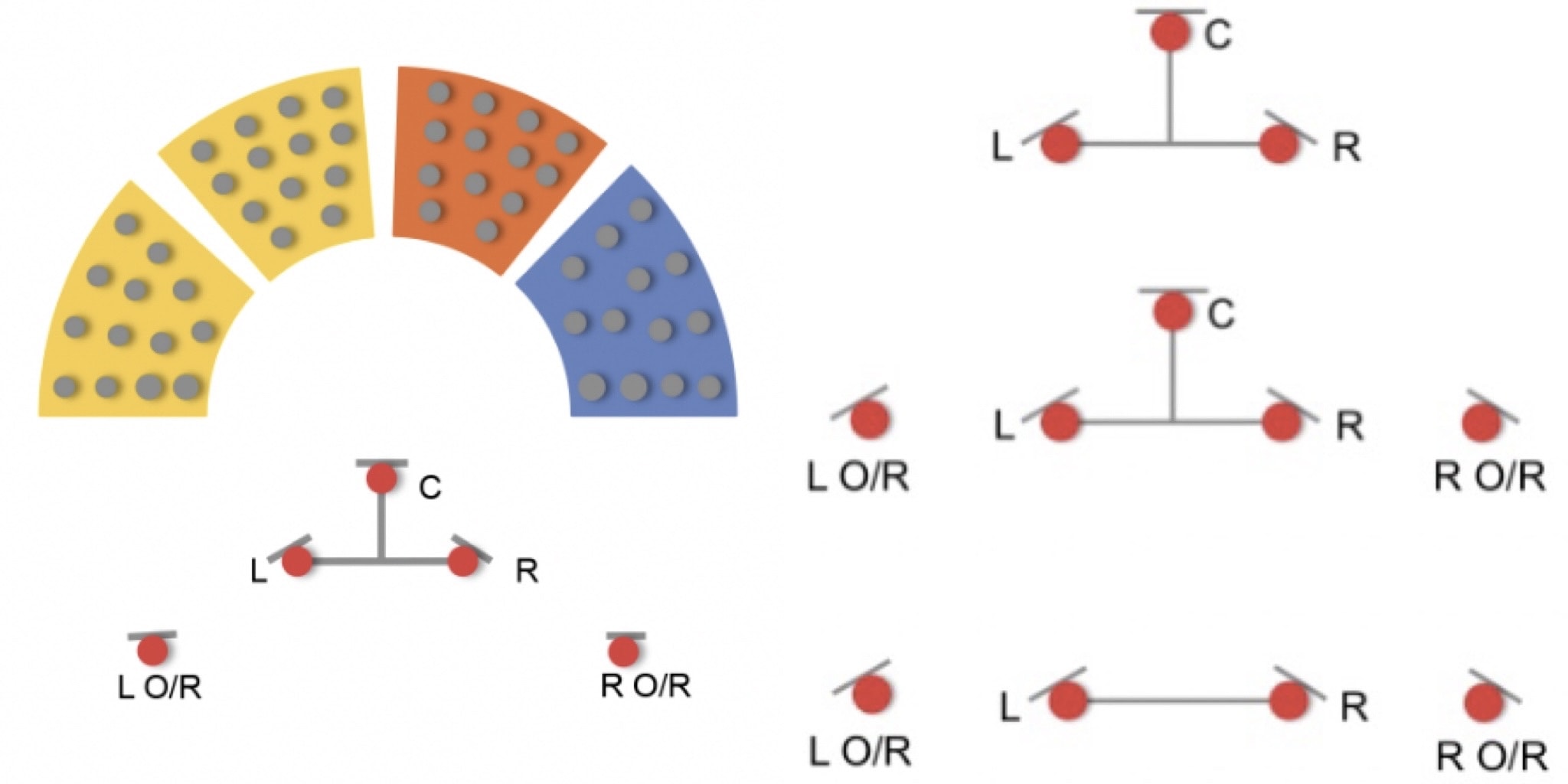 The Decca Tree in The Studio

When recording an orchestra the Decca Tree behaves like a spotlight. It needs to be accurately and carefully positioned to illuminate the musicians in a clear and even manner. Take the Tree too far and the light will smear to other sections of the orchestra making the image blurry. Bring it too close and the light will focus on the wrong section leaving some others in the “dark”. It’s all about creating a realistic representation of a full orchestra when the recording plays on two speakers. Balancing between the room sound and the direct sound of the musicians. 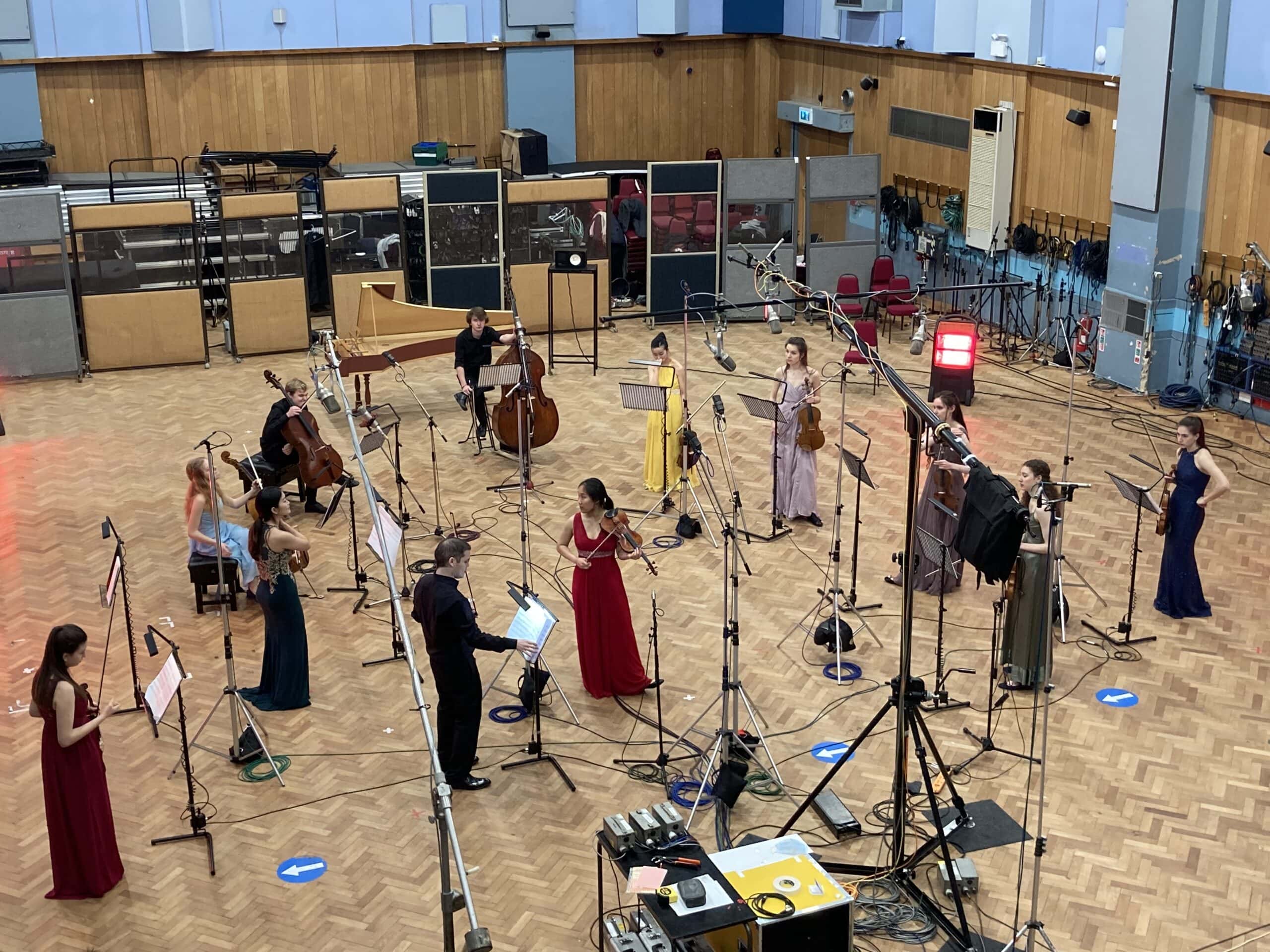 Our music production students have the unique opportunity of learning all the intricacies of the Decca Tree from award-winning and legendary engineer John Dunkerly in Abbey Road’s Studio One. John started his career working at Decca in 1969. He was one of the last engineers to learn and experience the Decca Tree from Kenneth Wilkinson himself.

John walks our students through his workflow, microphone placement and the set-up and arrangement of the Decca Tree. Typically in these sessions, the students move between the live room and the control room. They then listen to the difference between the musicians perspective and the engineer’s perspective.

Recording a full-size orchestra and learning first-hand from a Decca legend is a once in a lifetime experience that provides the knowledge, perspective and resources to be prepared for any recording scenario you might encounter. You can find out more about one of these sessions in this article about recording with the Royal College of Music in Studio Two.

You can find further details on the Decca Tree and the secrets of classical recording in the recently published book “Classical Recording. A practical Guide In The Decca Tradition”. And Tape Op have a great article about the history and use of the Decca Tree. Check out this blog too, to find out more about another of our favourite microphones, the U47.

Thanks as always to alumnus Carlos Bricio who researched and wrote this blog.

Meet Lauren Coker: Student Administrator and Marketing Assistant
The Ultimate Student Guide to Angel, Islington
Categories
Book A Tour
Fill out the form below to visit our campus and studios.
Recent posts
16/05/2022
How To Get Started Recording Drums
Read article
30/03/2022
Celebrating IWD 2022 with Abbey Road Equalise at Angel Studios
Read article
23/03/2022
Roland: Looking to The Future
Read article
This site uses analytical cookies to improve your experience on our website. You can read more about our how we use cookies in our privacy policy. Please accept to confirm we have your permission to place additional tracking cookies:YesNo