Dolby Atmos | Everything You Always Wanted To Know

Ever since its debut in 2012, Dolby Atmos has been a revolutionary way to deliver films and music to the public. We have seen studios, artists and cinemas around the world incorporating this technology into their workflow to create immersive audio experiences. Even streaming services like Netflix, Amazon or Apple Music have started asking for content being delivered in this format.

Brad Rees is a Sound Editor and Re-recording Mixer at Molinare. He has been mixing in Dolby Atmos since 2019 for productions such as the Downton Abbey film and Peaky Blinders.

Together with Brad, we will uncover what exactly Dolby Atmos is, how it works and be immersed in the magic of this audio experience.

What is Dolby Atmos?

Dolby Atmos is an audio format that allows the creation and delivery of audio beyond the classic stereo, immersing the audience in a realistic 3-dimensional audio experience.

When we listen to something in stereo we only perceive sound coming from either left or right. When surround sound came into play we were also able to feel that sound was also coming from behind. Nowadays, what Dolby Atmos has brought to the table is the possibility to position and move elements in the sound field in a 3-dimensional space. This allows us to create the illusion of sound coming from any direction around the audience; enhancing the clarity, depth and fidelity of the audio.

Brad describes Atmos as a great tool to create sonic contrasts compared to traditional stereo. When he mixed the movie, Downton Abbey, in Atmos he was able to create transitions from a very narrow and closed space during the interior scenes to an open and lush British countryside. This enhanced the beautiful visuals of the movie and took the experience of the audience to a different level.

The Setup for dolby atmos

A typical surround sound system consists of left, centre, right and surround speakers, divided acoustically into two or four zones. All speakers within a zone receive the same audio information.

In a Dolby Atmos setup, these zones are enhanced and expanded thanks to the addition of overhead and extra surround speakers. In addition, all speakers in the Atmos setup are powered independently and receive their own audio feed which makes them their own acoustic zone.

To mix in Dolby Atmos an array of front, back, side, and overhead speakers are required. The minimum setup is a 7.1.4 speaker array: 3 at the front, 2 at the sides, 2 at the back, 4 overheads and 1 Low-Frequency Effects subwoofer (LFE).

Atmos is an object-based format. This means that audio sources are considered objects in the sound field that can be located within the immersive space.

There are two key elements in an Atmos mix: Beds and Objects.

Beds are single or groups of audio channels that send audio to speaker locations. You can consider them as your foundation of the 3D space we are creating. Sounds like ambient effects or music backgrounds benefit from being placed in these beds.

On the other hand, Objects are sounds that can be moved freely around the 3-dimensional space. This allows filmmakers to decide exactly where the sound should come from and where it should move. From a helicopter flying above the audience, or a car passing by to your left-hand side.

Dolby Atmos allows running up to 128 audio tracks divided in 10 beds (along 9.1 channels/speakers) and up to 118 audio objects. There are different approaches when mixing all these elements and it is very dependent on the material being mixed, but from Brad’s experience, most of the sound field in a movie can be achieved using Beds correctly and applying some of the workflow when mixing in traditional surround. It is very exciting to be able to place sounds in a 3D environment to enhance the experience of the listener but it is important to remember what is the end goal. The sound needs to help deliver the main message of the production without being too distracting. Keeping the mix in a place where people can understand it.

But, it is not only about the speakers. The Atmos processing plays a big part in the system as it is able to assign each audio track to its corresponding speaker within the room regardless of its size. It doesn’t matter if you experience the playback in a 64 speaker theatre, with smart speakers, soundbars or mobiles, the Atmos processor will be able to adapt to each system and produce the same effect.

The software behind the creation of these translatable mixes is the Atmos Renderer. This software creates a master Atmos format audio file that contains all the mix information, including 128 channels of audio, panning metadata and binaural settings. In short, one mix to rule them all. A single file that can be played on all the Atmos-enabled systems and devices in the market and that can be delivered together with the other mixing formats.

The Renderer also allows monitoring the projects in different formats and speaker setups. This way the mixes can be taken across different studios with different speaker counts and still monitor everything as expected.

The sound needs to help deliver the main message of the production without being too distracting.

Brad’s workflow when mixing in Atmos starts by monitoring in stereo whilst undertaking all the panning and object placing for 7.1.4. Based on his experience and understanding of how the system will perform for different materials, he is able to make decisions on which elements and how much signal to send to each speaker. Then he will finalise the mix in the studio with the full-size Atmos rig to tweak the small details and make sure the mix is at its best. The Downton soundtrack was premixed in 5.1 then completed in full Atmos at Abbey Road’s Dolby Atmos Premier accredited Mix Stage. Brad has adopted the stereo to Atmos workflow more recently as he has been doing more editorial work based in suites with only stereo capability.

If Brad is working as a mixer and not in an editorial capacity he will try and work in Atmos from start to finish where possible. When working as an editor he will work in stereo knowing that the mixer (himself or otherwise) will be making a call on those choices in a fully Atmos capable studio afterwards during the final mix.

But Atmos can also be experienced using binaural rendering to allow monitor immersive mixes on headphones. Binaural is a two-channel audio intended to be played directly into the ears of the listener. It allows them to experience sound all around them as they do in the natural world.

Having the possibility of starting Atmos mixes using only a pair of headphones and at the same time experiencing how the mixes will translate in user devices can be of great help for engineers. Brad has started testing the possibilities of spatial audio on headphones and using some of the newer devices in the market to monitor Atmos mixes in ambisonics. Although it is still a bit experimental, it is an interesting experience that could help to make more accurate decisions on Atmos mixing when 7.1.4 systems are not easily accessible.

Long gone is the time when Atmos was only meant for big theatres and blockbuster movies. More and more distributors, manufacturers and creators are incorporating Atmos in their services and productions. Abbey Road Institute is training the next generation of audio post-production engineers to include the Atmos workflow in their bag of tools. That’s why mixing in Atmos is a central element in our new Advanced Diploma in Audio Post Production for Film and TV which also includes a bespoke masterclass in Abbey Road’s Mix Stage and learning from industry-leading experts in post-production throughout the programme. 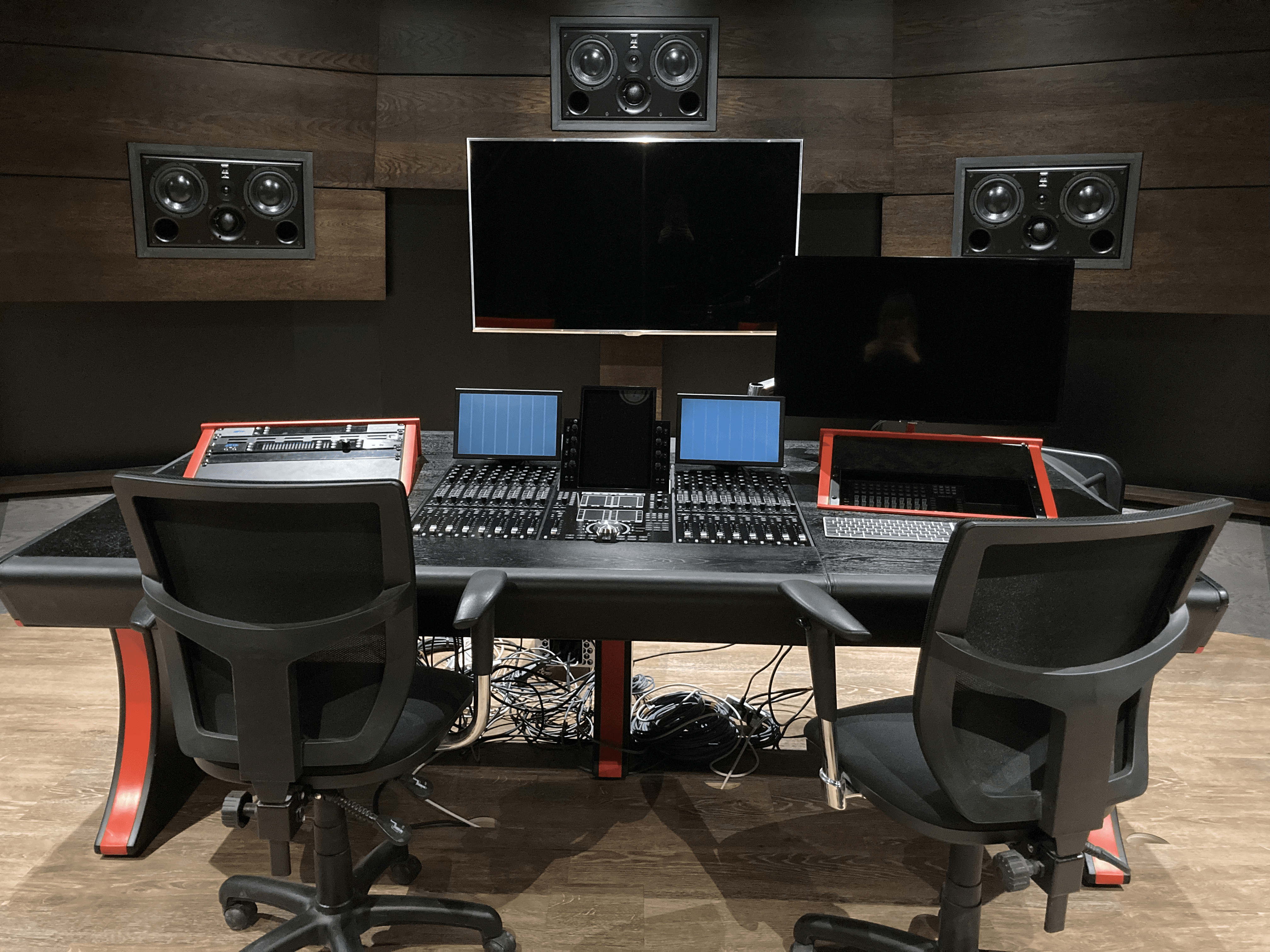 Thanks as always to alumnus Carlos Bricio who researched and wrote this article.