Advanced Diploma student Alexander Constanza has been busy in the school’s production rooms creating the tracks for his upcoming project Hidden. The project began with Alex’s fascination with the intangible aspects of life. ‘Love, Drive, Connection, are all things that you can’t see in life yet are very powerful’ Alex explains. For this project, Alex will hide his identity to let the focus be on the connection to the music. Alex grew up in Glastonbury surrounded by music throughout his teenage years.

Growing up in Glastonbury

After seeing the likes of The Prodigy and Pendulum at Glastonbury’s iconic music festival Alex became fascinated by synths. He was excited to explore the Roland synths at Abbey Road Institute and has been tinkering away with them since he started the program. After weeks exploring different sounds, Alex composed an EP’s worth of songs that he looks to release soon. We spoke with Alex to find out more about the project.

It is such a musical place. I went to Glastonbury every year growing up so it was a big part of my life.  My view of what a great show should be is pretty large scale because I’m basing it on Glastonbury headliner sets.  I saw acts like The Prodigy, Pendulum, Faithless, Massive Attack. It inspired me and made me want to do it myself.

What made you want to come and study at Abbey Road Institute?

What are some of the instruments you enjoy using?

The Roland TR-8S  is an absolute beast. It incorporates all the Roland classic drum samples so you can pick all the different samples.  It’s incredibly versatile. The System 8 Plug Out synthesizer is also great because it uses the Jupiter and Juno sounds. 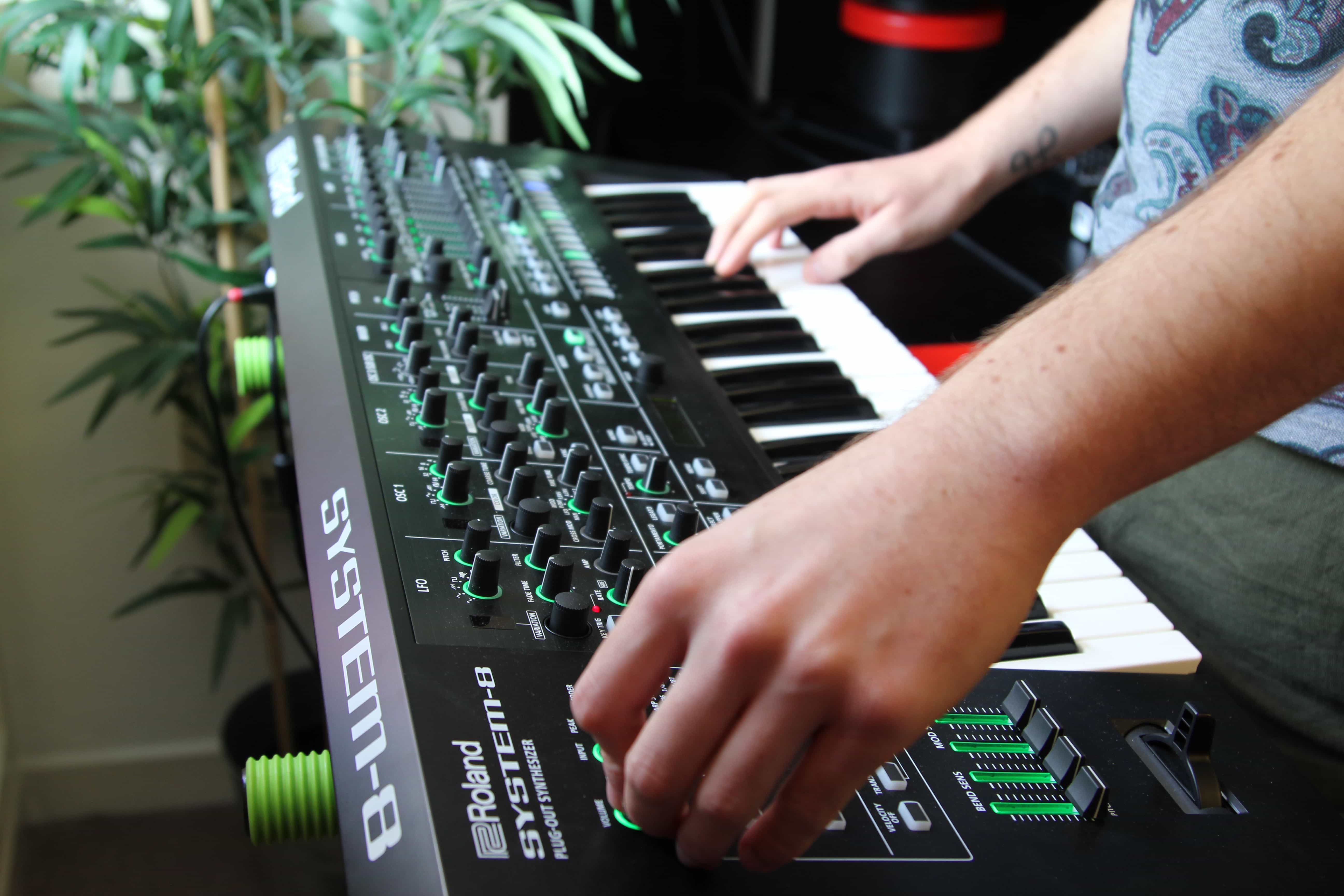 Tell us about the new EP, what inspired it?

The influence for this EP came from when I was DJ’ing after school when I was 16.  I was a techno DJ and having these wild experiences at festivals. After that, I went on a meditation retreat. It was the ultimate contrast to the DJ thing.  I started practising meditation and living a different life than before. The project is the coming together of those two states. It’s the wild energy you get from festivals mixed with more reflective internal experiences.

How do you feel about using analogue gear vs. digital?

I love both really but I do feel that I need to have some kind of hardware in front of me. I like to play with parameters on the fly and physically touch things. It’s important to have an immediate reaction. When I’m doing production and mixing I’m happy to be in the box.

How has your writing changed since this course?

I used to be concerned with capturing a live performance.  When I was performing before the programme, everything was improvised.  Now that I’m on the course I’m going more in-depth to capture my music. I want to polish things off more.

The project won’t reveal your face.  Tell us your decision to anonymize yourself?

The idea behind the project is driven by my fascination that most things in life that are important are hidden in some way.  The connection people have between each other is hidden. So the project is talking about perceiving the things you can’t see. Therefore my project will be Hidden. Stay tuned in the coming weeks for release announcement!

Getting To Know Music Theory Lecturer Mat McKinley
Meet the Song Production Masterclass creative team: Audrey Riley & The Kings Parade
Categories
Book A Tour
Fill out the form below to visit our campus and studios.
Recent posts
16/05/2022
How To Get Started Recording Drums
Read article
30/03/2022
Celebrating IWD 2022 with Abbey Road Equalise at Angel Studios
Read article
23/03/2022
Roland: Looking to The Future
Read article
This site uses analytical cookies to improve your experience on our website. You can read more about our how we use cookies in our privacy policy. Please accept to confirm we have your permission to place additional tracking cookies:YesNo