Students and alumni come together in Studio Three

Whilst it’s a regular part of the teaching at Abbey Road Institute, it’s always exciting to be recording a session in Abbey Road. Especially when it’s your first time. This was the case for our September class last month. 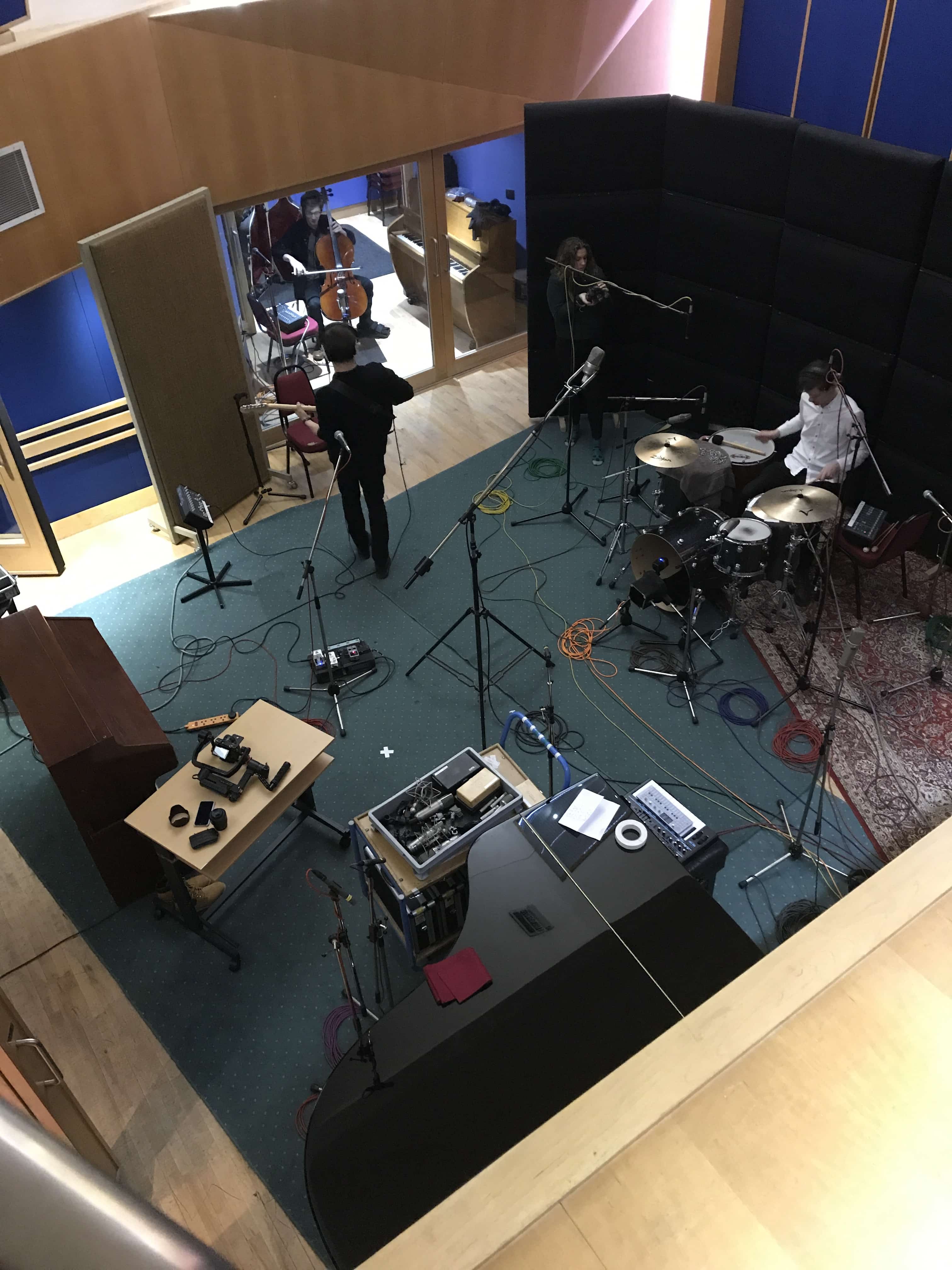 We like to mix it up! Working on these sessions with different engineers and producers to give our students a variety of perspectives, experiences and ideas. This recording was led by programme director Carlos Lellis. Student Guy Henderson from our March class took the controls as ProTools operator. It was an inspiring introduction to the world of large-format production. 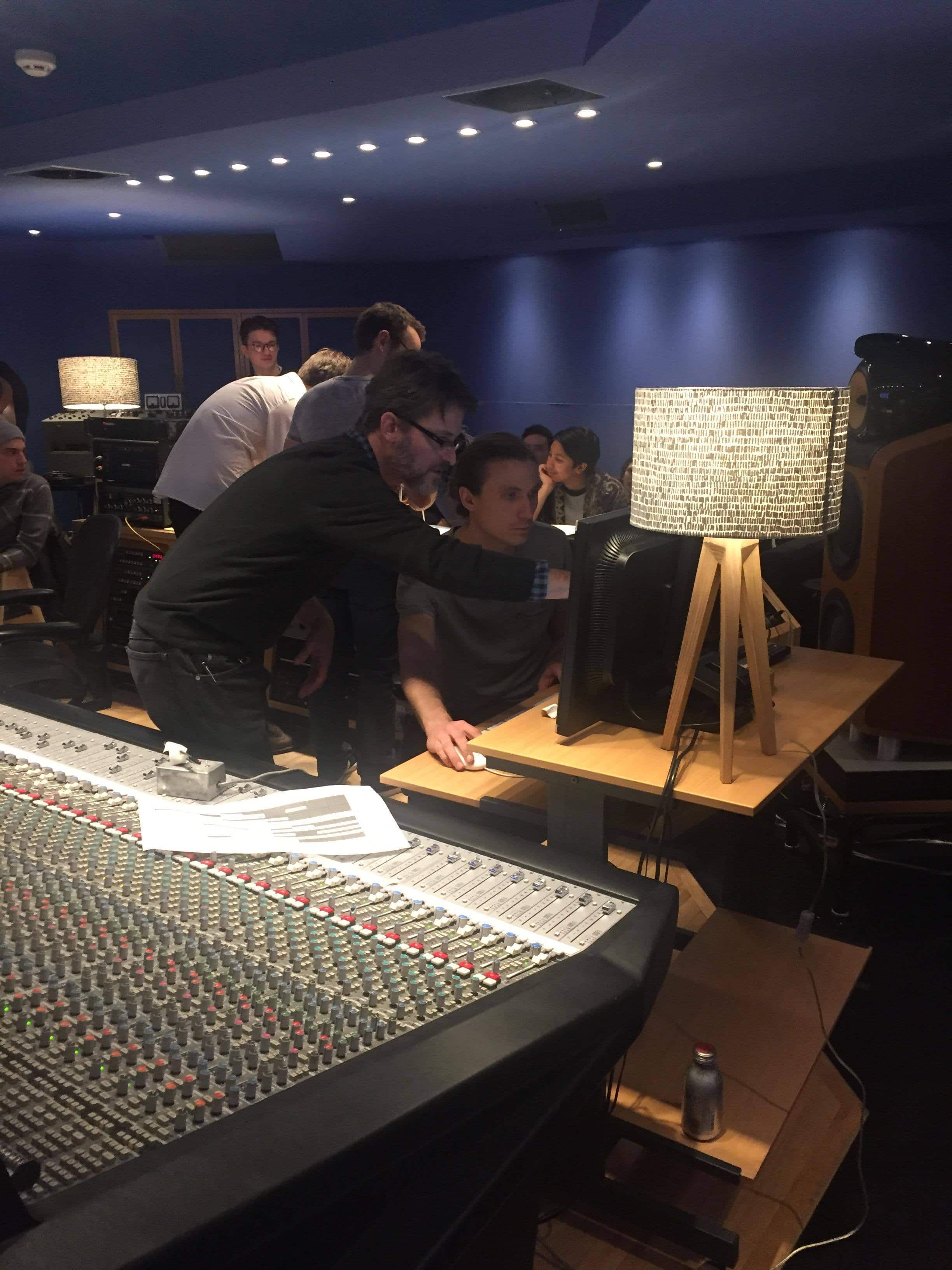 Carlos Lellis and student Guy Henderson in the control room

We invited in Jack Chown, Abbey Road Institute alumnus and drummer with band Winterfalle to record their own composition “Ends the same”. Jack graduated from our very first cohort last year and has gone onto great things. He is currently working in-house as an assistant and engineer at No.1 Baltic Place where he works with a wide variety of artists, songwriters and producers. His clients have so far included The Rolling Stones, Liam Gallagher, Guy Chambers (w/ Robbie Williams), Years & Years, Haelos, Wes Anderson, James Bay, Charlie Fink, Jessie Ware, The Hairy Bikers, Ella Henderson, Caspar Leopard and Adrian.
Carlos Lellis started the day introducing the students to Studio Three and going over the initial plans for the session. After a thorough inspection of the studio, the production team assembled for a discussion about what they aimed to achieve and how to approach the recording of different elements.  Basic tracking and overdubs were outlined in order to optimise the use of studio time, with minimum repositioning of microphones and resetting of cue mixes, which can commonly take excessive amounts of recording time. 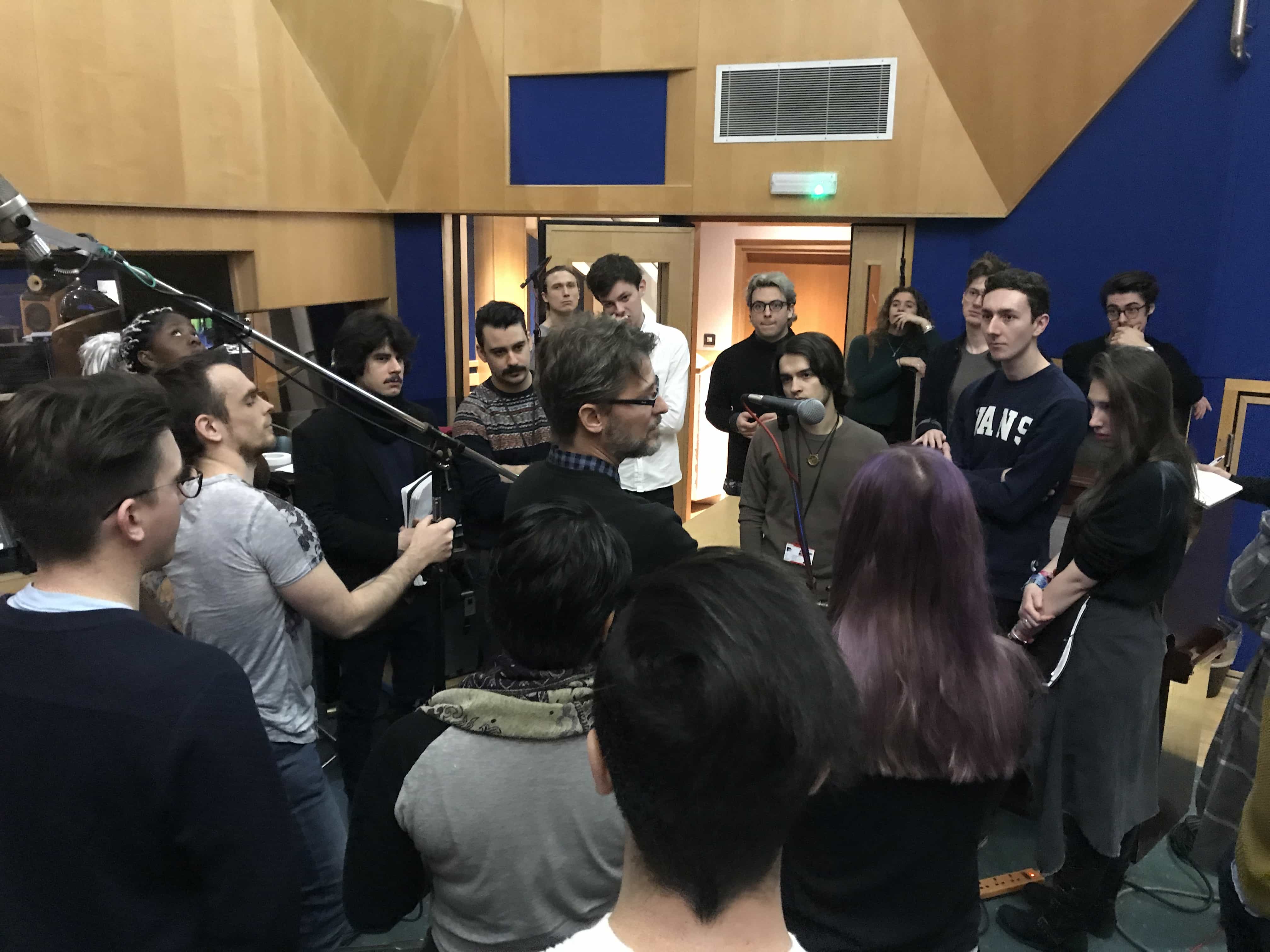 Our September class were immersed in the session, observing how producer, engineer, and musicians collaborate to develop a song from a demo into a final production. Taking notes at every stage, they were able to follow each step of the production process and learn valuable lessons about the producer-artist dynamic. Following on from the session they will each individually mix the track ‘Ends the Same’ and have their mixes judged by the band. 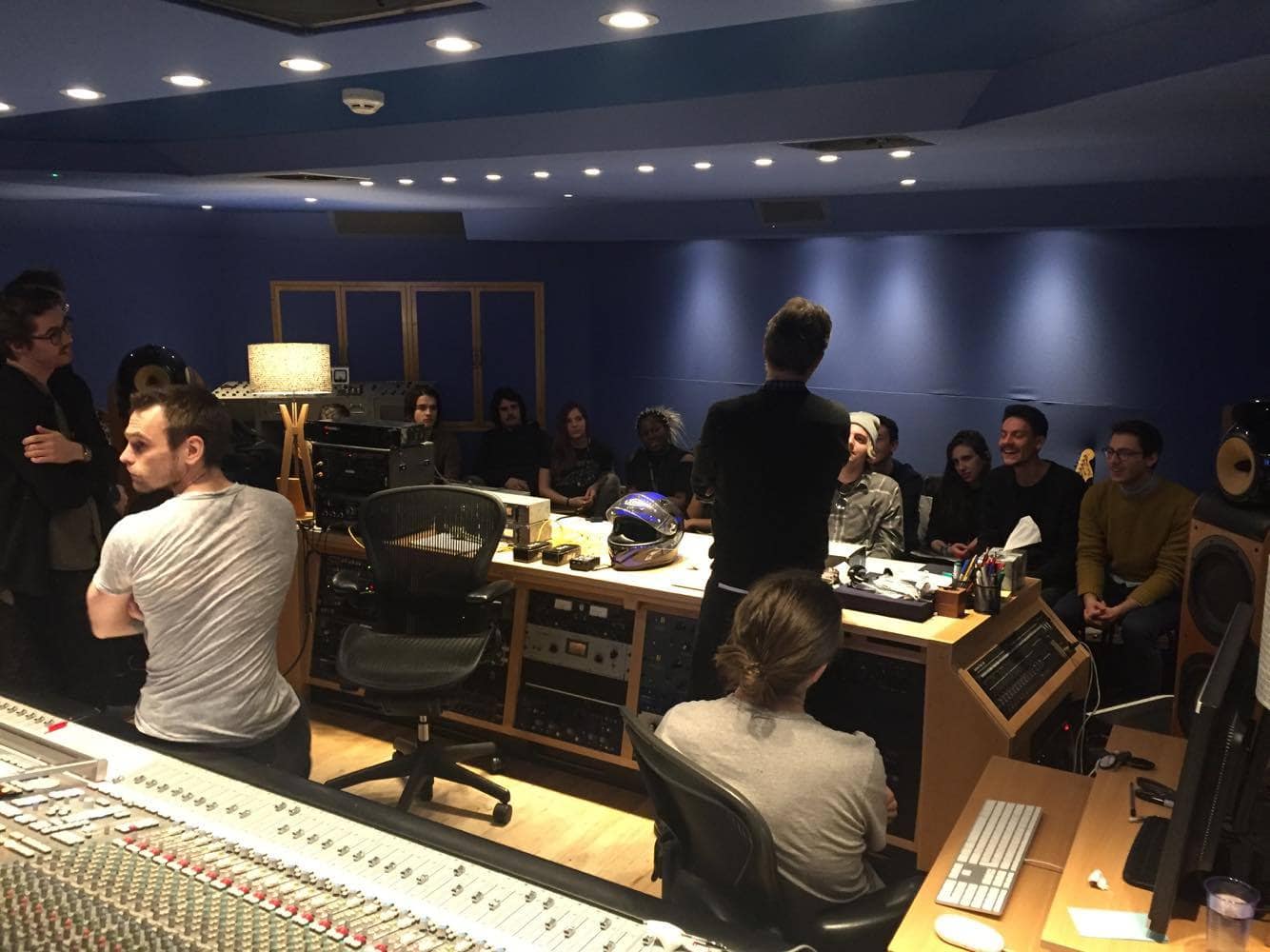 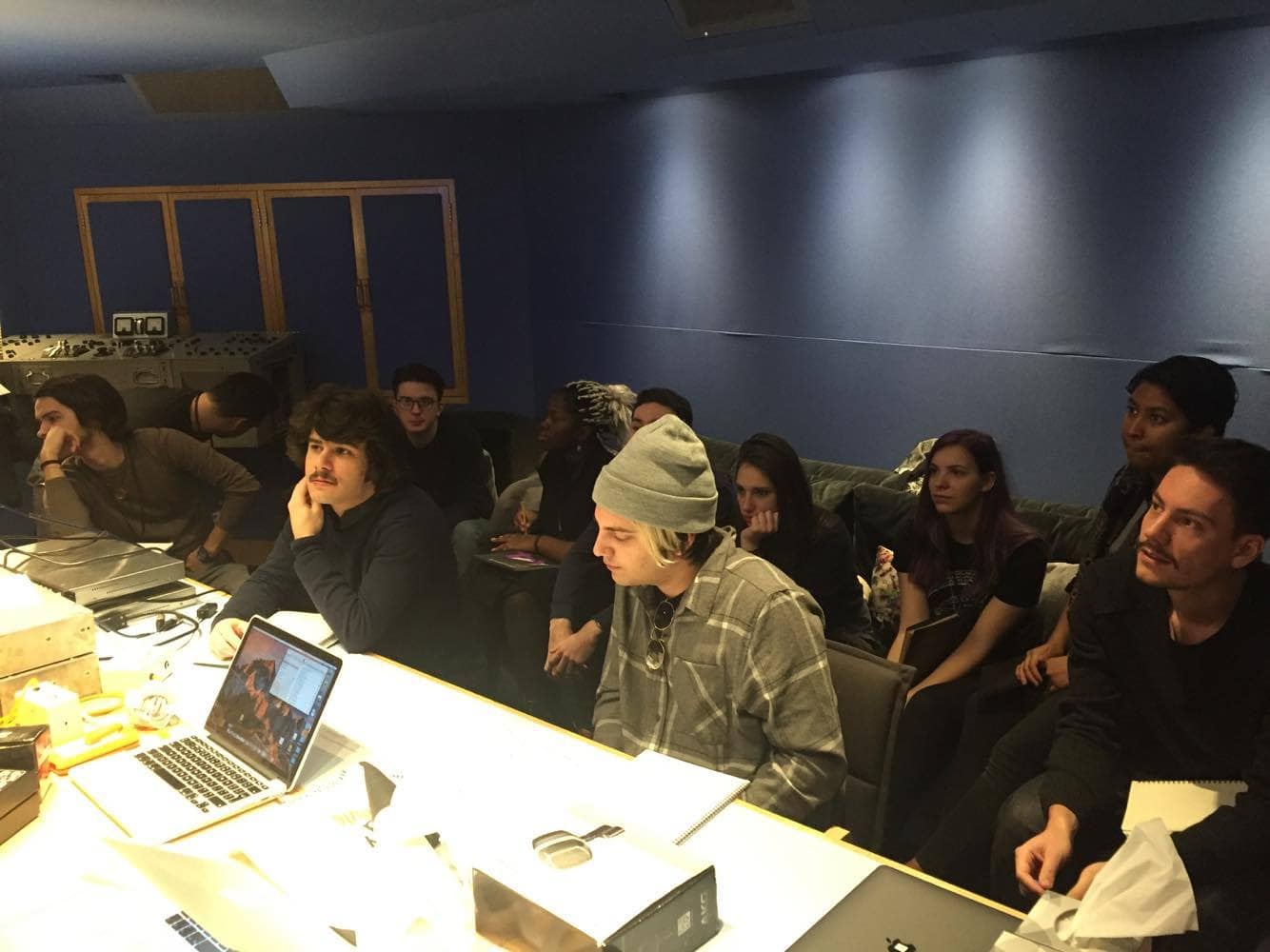 Our students during the session

There are many lessons to take away from a session like this. The main objective of this recording was highlighting the importance of collaboration between all the members of the production team and how you pull together the technical and artistic elements – these should not be seen as distinct or separate.

Do you want to be part of our recording sessions at Abbey Road?

Our next Advanced Diploma in Music Production and Sound Engineering starts in March 2018. Applications are open until 3 February 2018 and you can apply online on our website. If you have questions about the course and studying with us come and visit us, we look forward to meeting you.

Abbey Road Students takeover BBC Amplify!
Graduation highlights in Abbey Road Studios
Categories
Book A Tour
Fill out the form below to visit our campus and studios.
Recent posts
06/12/2021
Scoring films with Spitfire Audio's library and Abbey Road One
Read article
19/11/2021
Dolby Atmos | Everything You Always Wanted To Know
Read article
10/11/2021
Abbey Road Amplify: How To Build Your Career As A Producer Or Engineer 🎥
Read article