Graduates inspiring the next generation of young women in tech

It’s a late summer Saturday, and the beautiful art deco theatre of the O2 Academy in Glasgow is filled with buzzing young women and a blue-purple glow. Two young ladies, both a little nervous, are preparing to give a presentation about something they are both passionate about – Music Production! And the beautiful setting makes it extra special. It’s the AlGirlRhythm event organised by Stemettes, where young women have the chance to meet people from across the music industry, technology industry, engineering and MusicTech. Marta Maria Di Nozzi and Lizzie Arnold have come a long way. They both started making music at a young age and at a certain point in their lives decided to take the path turning it into a career. Studying at Abbey Road Institute was their latest step in that remarkable journey. And sharing their experience at the Glasgow event seems to be quite relevant as one of the key findings of a recent research report suggests:

‘Women are not considering technology careers as they are not given enough information on what working in the sector involves and also because no one is putting it forward as an option to them.’
(PWC 2018)

Although these findings are not entirely new, there are signs of progress. A woman (still) has never won a ‘Producer of the Year’ Grammy and a recent study suggested that only 2% of music producers are female (Accenture 2019)’. However recent figures show that the overall number of women working in the music industry in the UK is steadily growing (UK Music 2018). This includes exciting jobs like sound engineers, music producers, sound designers and studio managers. To change the lack of female role models (another PwC report key finding), Marta and Lizzie devoted their time and efforts in participating in the STEMettes events in Glasgow and London, together with the Abbey Road Studios MD Isabel Garvey and her team. In an interview (continues below the picture), we found out how Marta and Lizzie got involved with the Stemettes and the Institute.

Tell us a bit about your background and how did you get involved with Stemettes and the Glasgow event?
“When I first heard about this event through Abbey Road Institute’s global marketing manager Hannah Fitzgerald, it just blew my mind. My first thought was; I wish I had this in my teenage years!” Marta responded. Born and raised in Italy she got into music at the age of 6. First playing classical guitar, followed by electric guitar and playing in a small metal/hard rock band, she started singing and taking classes when the band lost their singer. Soon afterwards she added bass and keyboards to her repertoire and moved into different genres like pop and electronic music. This opened up the world of recording and audio engineering to her and she realised that this is what she wanted to do. After getting her degree at the University in Rome (in Electronic Music and Sound Engineering), the question arose: should I stay here? While visiting London and the Abbey Road Institute, she found the answer. She started in March 2018 and is now a graduate. “Music and technology have always interested me. But unfortunately, I could not talk much about these kinds of subjects when I was young. Only with the few boys in my surroundings, but still, it was difficult discussing this as a girl and sometimes even perceived as awkward. So when Hannah asked me if I wanted to participate in this event to talk, I felt honoured to be part of it. It was just a good thing to do.”

Lizzie says “I wouldn’t have really thought about sound engineering and music production falling into the STEM category since it’s just as much an art as a science.” She adds “I got into music pretty young and started taking violin lessons when I was 8. Making music was always an escape for me, and I soon picked up the piano and guitar. There was never really a question that I would do anything else, so I went straight on to do a degree and a Masters in Musicology. While I was studying for my Masters, I started to get into the sound engineering side of things, doing sound for student theatre and films. I did bits of work experience after that but still felt that there were a lot of gaps in my knowledge, which is what led me to go for the diploma at Abbey Road Institute London. I think it’s great that Stemettes decided to cover this area, especially given how extremely male-dominated it is even today.”

(interview continues below the picture) 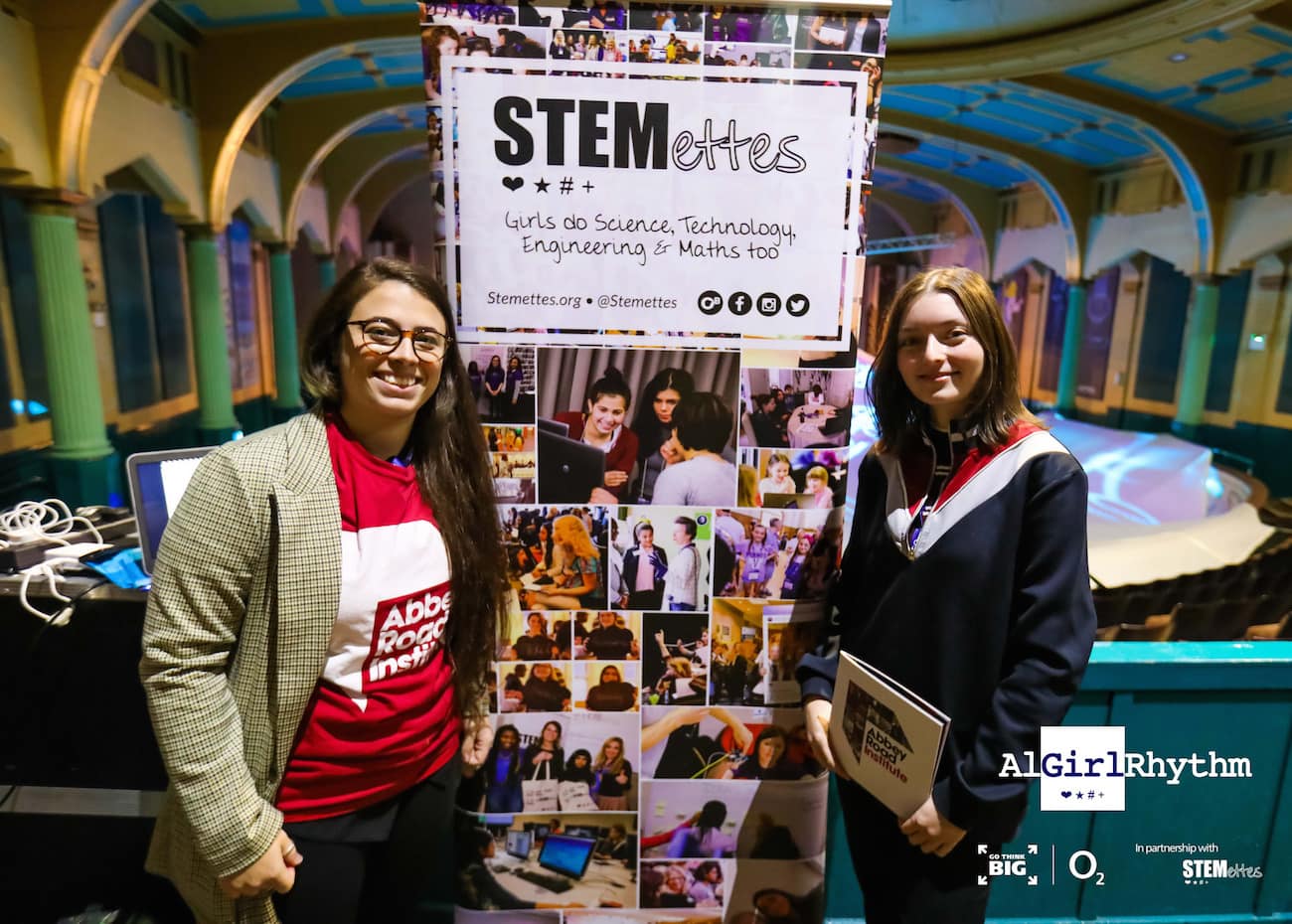 Marta and Lizzie at the Stemettes event in Glasgow. Picture credits Stemettes

So how was the AlGirlRhythm event in Glasgow?
Lizzie and Marta flew to the Glasgow event with Isabel Garvey (MD Abbey Road Studios) and her team, including Dom Dronska (Senior Digital Marketing Manager) and Sophie Ray (Studio Bookings Co-ordinator), each of them presenting at the event. Isabel Garvey gave the opening presentation related to women empowerment and women in tech. “This was so inspiring for me,” Marta says “just imagine how this must have been for all the young women in the room”.

After the opening and inspiring panel discussions, it was time for Marta and Lizzie to talk.
Lizzie explains: “We gave a presentation on Music Production, outlining the different roles in the studio, and going through the different steps involved in the production process from the initial song idea to the final master. Marta also did a quick demo of a mix in ProTools, showing how she cleaned up noisy tracks and added effects processing to vocals. The response was great, and we got invited back to do another presentation in London in December, which was a huge compliment!”

“After our presentation, we had girls approaching us asking questions about how to start after studying or what study to start, but also mothers asking advice for their daughters on which steps to take. That was really nice, and it felt great, both the Glasgow and London event.” Marta says. “But I also felt that I was no longer a student, the one taking notes. This time it was me talking, and it really felt that what I had to say mattered, that it finally had value. It was strange and at the same time an incredible feeling.”

You’ve both come a long way. What did studying at the Institute bring you?
Lizzie says “I had a great time at the Institute. It’s a very well-rounded course, which is what made it stand out to me in the first place. It brought me some great opportunities and experiences. I feel very empowered by how much I’ve learnt in the past year, and I think it has put me in a great position going forward.”

“It really changed a lot for me. Before the Institute I was getting used to the idea of not having any opportunity in the music industry.” Marta explains. “I consider myself as a hard-working person, but at a certain point, I started to think that what I was doing was wrong. The Institute changed that. There you will find people that care about you as a person, and they acknowledge your qualities. They helped me to develop my skills and to become the best version of me. It might sound cheesy, but that’s how it really feels for me.”

You are both graduates now. What’s next?
Lizzie: “I’m hoping to find work as a studio engineer. I’m particularly interested in classical and film music recording, so I’m focusing on that area for the moment.” 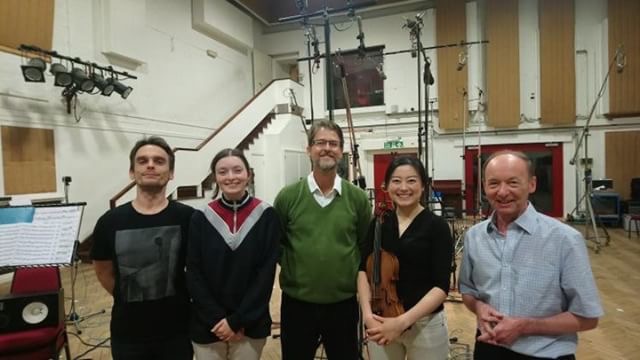 Marta: “I want to become a studio engineer. That’s what I love to do most, and I’m passionate about mixing. Currently, I’m a producer for an artist, which I really enjoy as well. And the great news is that I soon will start working as a technician at Abbey Road Institute!”

We all have a set of qualities that define us making us unique. Which ones do you bring to aspire this?
Marta: “I believe I’m a dedicated and hard-working person, which also helped me a lot during the course. But sometimes that also means that I don’t know when to stop. Then the people around me have to remind me to stop.” she explains laughing. “I also see myself as a reliable person and having an eye for detail. And people around me say I have a lot of empathy. I think this combination helps me to look forward by knowing what to expect in situations or what to do next to get the best result. Something the Institute helped me a lot to develop.”

Lizzie: “I believe I’m calm, ambitious and hard-working, but also efficient and a fast learner. And my listening skills have improved hugely. I think the way that I listen to sound and music has changed a lot thanks to the course.”

We think these are all essential qualities to have as a sound engineer. But what would you say is most important for you in work?
Without hesitation, Marta says “Feeling! What I mean by that is the feeling that the song or the music gives you as a listener, the pride we put into the work, the fact that you did your best. Something I believe you’ll find in any creative job. Creativity involves other people and being part of the creative chain as I would call it, helping someone else in the creative process, respecting what others did before you, making it better, that’s what makes it so great and important to me. I often use the word ‘honour’. I feel that being part of that chain.”

What a beautiful way to look at work!

Both Marta and Lizzie want to thank Stemettes for their support and appreciation and the Institute and Studios for the opportunity.

And we want to thank Marta and Lizzie for their time and dedication. We will be watching them closely and are convinced they will continue turning ripples into waves and inspire others!

About STEMettes
STEMettes is a social enterprise working across the UK, Ireland and beyond to inspire and support young women into Science, Technology, Engineering and Maths careers (known collectively as STEM). Active since 2013 they have been working hard to make this happen.
Feedback shows that 95% of the attendees have an increased interest in STEM-related paths after just one event. The perfect environment to introduce young women to a career in the music industry.

Further information and references:
More about the event: https://stemettes.org/blog/2018/10/24/algirlrhythm-technology-meets-music/

Video of the AlGirlRhythm Stemettes event in Glasgow last year.

Abbey Road Institute students awarded internship Down Under
The Decca tree in action in Studio Two
Categories
Book A Tour
Fill out the form below to visit our campus and studios.
Recent posts
06/12/2021
Scoring films with Spitfire Audio's library and Abbey Road One
Read article
19/11/2021
Dolby Atmos | Everything You Always Wanted To Know
Read article
10/11/2021
Abbey Road Amplify: How To Build Your Career As A Producer Or Engineer 🎥
Read article