Carlos Bricio joined our team recently as Head Technician but has an established history at Abbey Road Institute.  In September 2016 Carlos enrolled as a student and following his graduation and alongside other commercial work he also became a technician. Following successful roles at Humtap and Hypersurfaces Carlos now leads the Institute’s technical team, supporting students on a day to day basis and keeping our studio, production rooms and classroom equipment world-class. 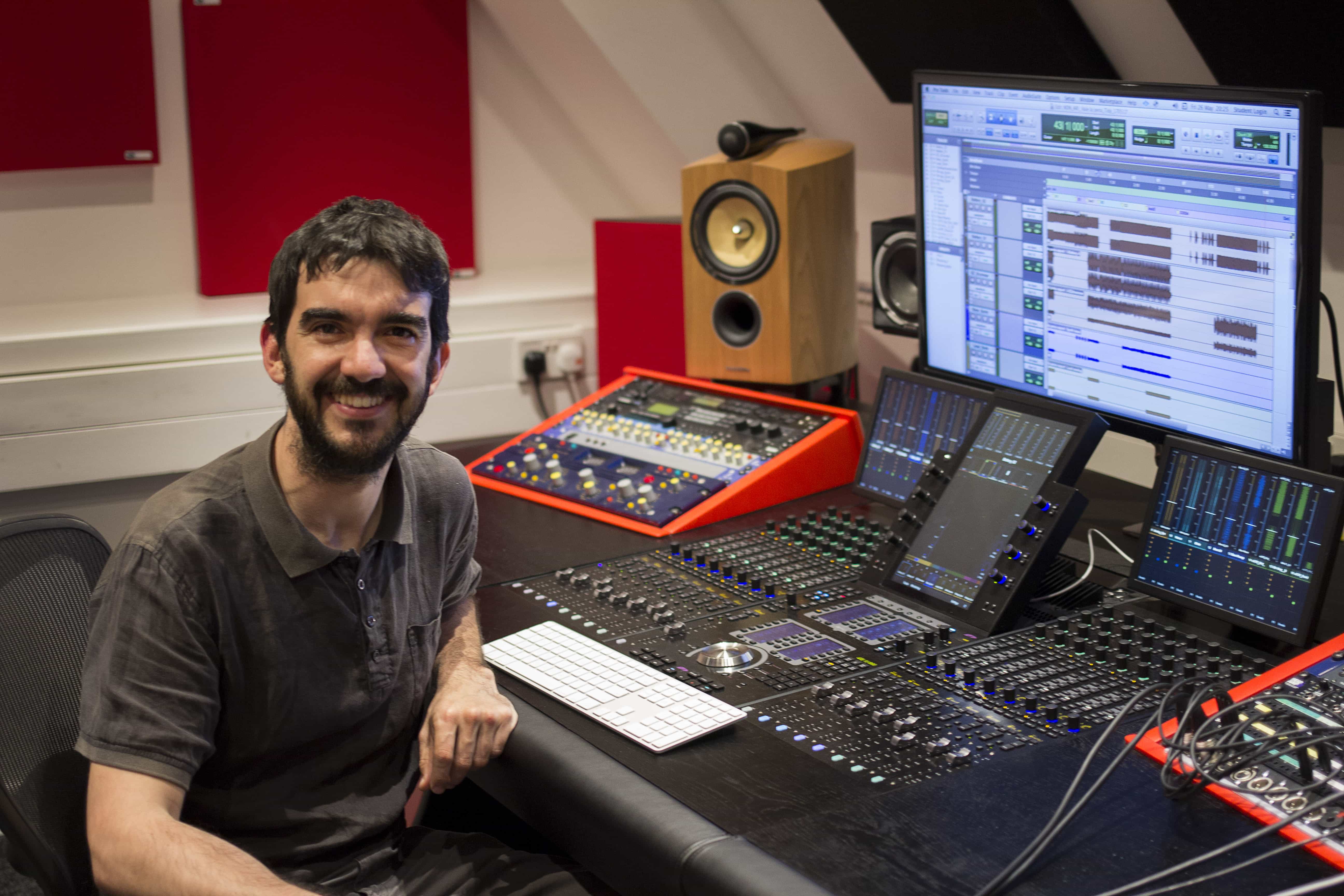 You were first a student with us and now join us as Head Technician. What have you been up to since graduation?

I worked as a music producer for Humtap. We were doing creating an app that used artificial intelligence to create music. After that, I worked for Hypersurfaces as an audio engineer. It is also an AI company that can make any item smart and playable using acoustics. I was on a team that recorded interactions with different surfaces for the AI to learn. I’ve also been freelance producing and mixing.

Tell us about how you started recording music?

I recorded for the first time when I was 18 with a band called Valium and learned a bit about the studio. At university, I got into prog-rock and metal. I was in a band called Dark Erial based in Madrid. We were recording ourselves and learning more about DAWs. After that, I almost always was recording the bands I played in and investing in microphones. I did a PhD in Microbiology but always really wanted to do music and have my own studio.

What were some of your highlights from the course?

The relationship I had with my classmates was really special. Everyone is very different yet has this big thing in common. You learn from the classroom but also from the other students.  There were so many ideas to get from other people. Everyday spending so much time at the Institute was great. From recording sessions to working on projects I was here all the time! I like the fact that any student can be into songwriting yet learn a different skill like writing for film. It covers so much and you get the tools to do what you want. 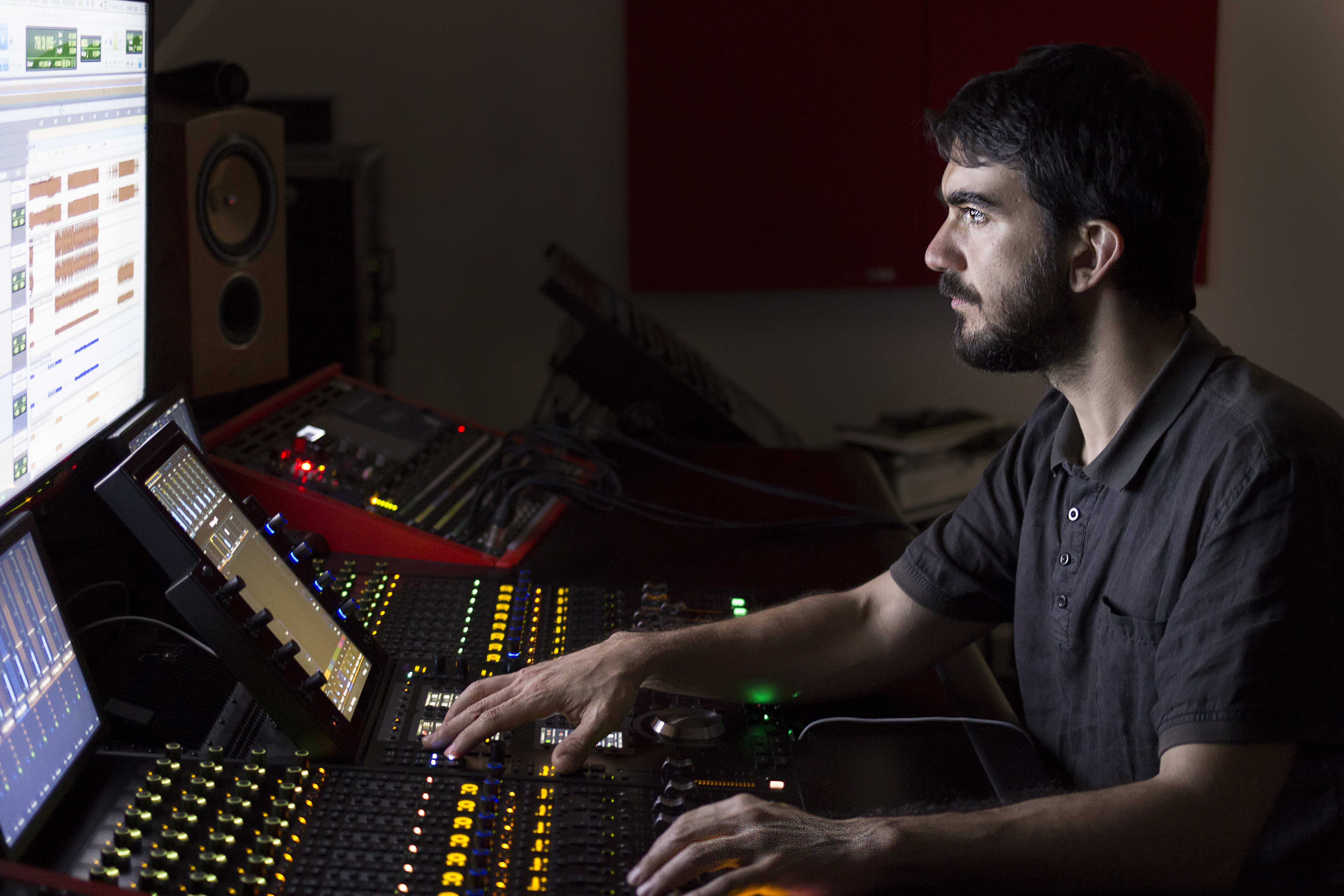 What does the role of head technician involve?

We have to be on top of all the equipment and the software. Everything has to run smoothly and be up to date. Every day the students need to feel like all the equipment is in the same condition it was day one of the course. If students have any issues with software as well we can help them. We provide assistance to recording sessions or any issues they have with the curriculum as well. The head technician organises the team of technicians and I help train them.  I make sure we have all the supplies we need and provide communication between the technical side of the team with the Campus manager Mike Sinnott.

What are some of your favourite personal favourite pieces of gear to use at the studio?

I love playing with the Neve Custom 75 console. I like to figure out the routing of the studio through the console and patch bay. There are endless possibilities you can do in the studio. I love compressors, it really is the sound of records. Not over compressing of course! The SSL and API compressors are great.  Lately, I’ve been using the Chiswick on a drum bus to give it some pump and life.

What musical projects are you up to now?

I set up a website for my production and mixing. I still play drums for friends and make sure I keep up my chops. I’m slowly building up a home studio setup with more and more equipment. I have a few Rode microphones, Shure, Sontronics and the Slate modelling mic which is very cool. I have a Roli and some guitar pedals as well.

Dub Mixing with Daniel Boyle
Students take part in Antelope Audio Microphone Contest
Categories
Book A Tour
Fill out the form below to visit our campus and studios.
Recent posts
06/12/2021
Scoring films with Spitfire Audio's library and Abbey Road One
Read article
19/11/2021
Dolby Atmos | Everything You Always Wanted To Know
Read article
10/11/2021
Abbey Road Amplify: How To Build Your Career As A Producer Or Engineer 🎥
Read article