Sylvia Massy is a recording studio legend: Her credits include Tool, Johnny Cash and Prince. She’s equally adept working as a producer, mixer and engineer. Pickles, cheese dogs and electric drills have all been used during one of Sylvia’s recording sessions (yes, really). It’s said that good things come in threes, so we’ve picked our three favourite quotes from a masterclass unlike any other we’ve had at Abbey Road Institute…

“Of all the vegetables, I think the potato is best…”

We are firm believers in recreating a track as a learning tool. If you want to emulate Sylvia’s sound, prepare to experiment with all kinds of unconventional techniques. During the masterclass, Sylvia used modified cables to filter sounds from our MiniBrute 2 through a variety of lightbulbs…and some Babybel cheese. 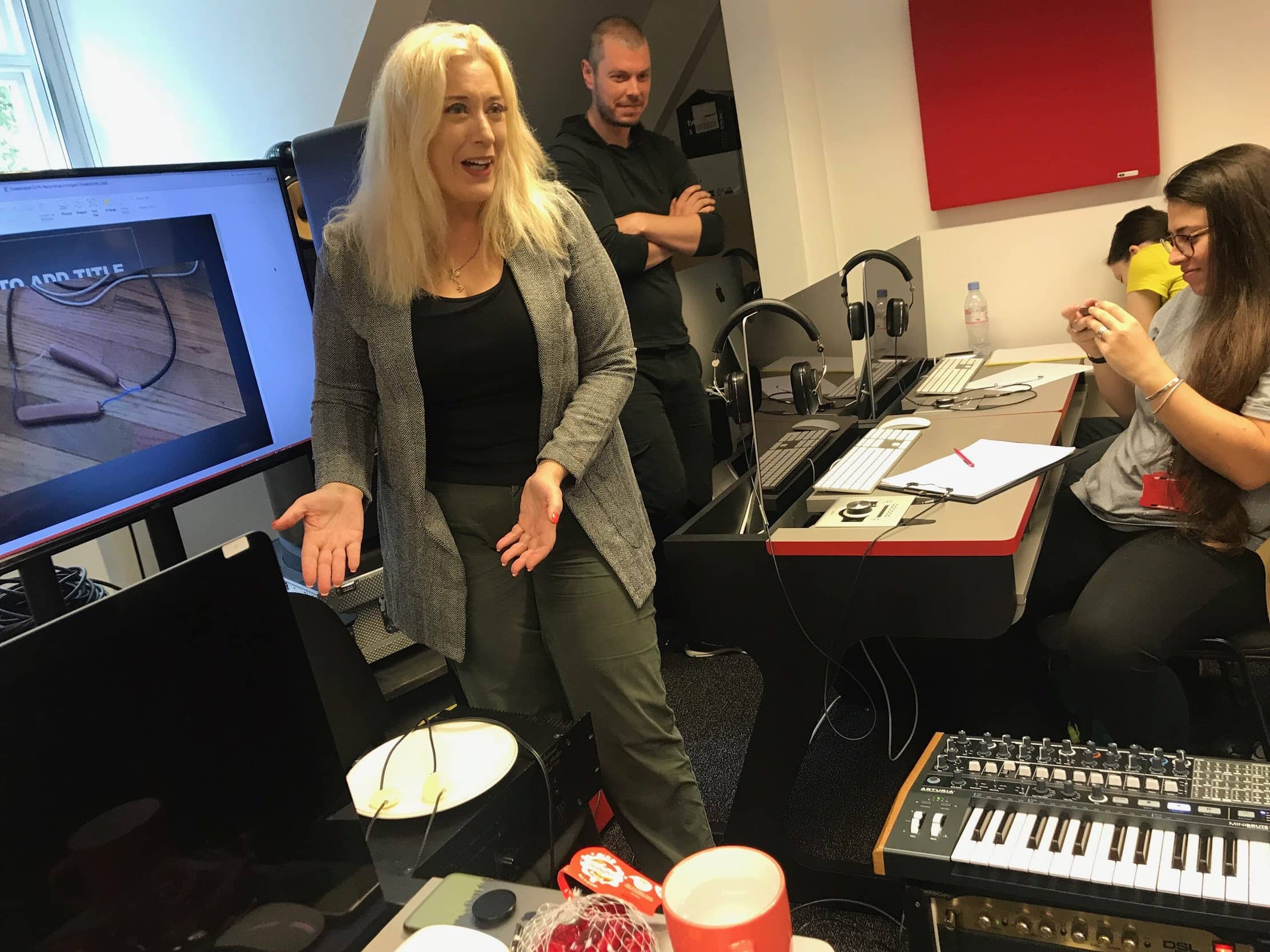 Not all experiments will work, and that is just fine. The point is, never be afraid to experiment. Thinking outside the box and developing your own sonic signature will be the reason why people ask to work with you.

Some final food for thought: frozen fish make excellent claves (though you need to work fast before they thaw) but the best food filter of all – according to Sylvia –is the humble potato. It has a lovely “sparkle”.

“It should always be adventurous”

There is more to finding your unique sound than simply filtering a signal through an object (besides, that technique has been taken). The options are virtually limitless: re-amping, “worldizing”  (a technique developed by Walter Murch for film sound design), building your own microphone, manipulating found sound, getting creative with mic placement or recording in unusual acoustic spaces.

Sometimes its a nice idea to save these experiments as a goal for finishing a more straight-forward recording process. It is always a good idea to capture a clean signal using a DI box as backup if your sonic adventure doesn’t sound as amazing as you had hoped. At the end of the day…

“It’s not about the equipment. It’s about the space you’re providing for the artist”

If your “best” microphone is interfering with an artist’s ability to perform, then it isn’t the best microphone to use. If you’re recording an upbeat pop track and the singer is down in the dumps, it’s time to figure out how to get them smiling again.

A final tip? Spend some time getting to know how to set up microphones, and isolate guitar amps, so that a band can perform in the same live room, says Sylvia:

“It’s more important for musicians to all be in the same room seeing each other and moving together. Some people can’t play together, but if you’re working with an artist that has a live show then you want to maintain that excitement that they do on stage you want to try them to be all together at the same time.”

Ready to discover your signature sound? Check out our Advanced Diploma in Music Production and Sound Engineering, or contact us for more information. Find out more about Sylvia Massy on her website.

Inside our microphone cabinet: the Neumann U47
A big welcome to our September class!
Categories
Book A Tour
Fill out the form below to visit our campus and studios.
Recent posts
14/06/2022
Hans-Martin Buff | Meet The Producer
Read article
16/05/2022
How To Get Started Recording Drums
Read article
30/03/2022
Celebrating IWD 2022 with Abbey Road Equalise at Angel Studios
Read article