After revolutionising pop music throughout the ’60s, The Beatles had one more trick in-store before the decade was over in the release of Abbey Road. The album marked a landmark in recording as it was The Beatles first stereo album recorded on the solid-state EMI TG12345; a console that would go on to record Pink Floyd’s Dark Side Of The Moon. The band was on the brink of a break-up but mustered up the magic once again. Recorded at what was then known as EMI Studios, the album was named after the road the studio was on and the album cover would be responsible for creating the world’s most famous zebra crossing. The studio then changed its name to Abbey Road Studios a year later in 1970 following the success of the album.

Originally entitled Everest, the imagined album cover was to have The Beatles travel to Nepal to take a photo on the earth’s highest mountain. In the end, they decided to walk a few steps outside their beloved studio and take the photo on home terrain and name the album after the road on which the studio lay. Over the years Abbey Road has served as a reference point for musicians, sound engineers, and producers alike. From the medley that ends the second side to George Harrison one-upping John and Paul with his contributions ‘Something’ and ‘Here Comes The Sun’, the record is packed with memorable moments. The Beatles even foreshadowed the progressive 1970’s by featuring the Moog Synthesizer before any band had done so. 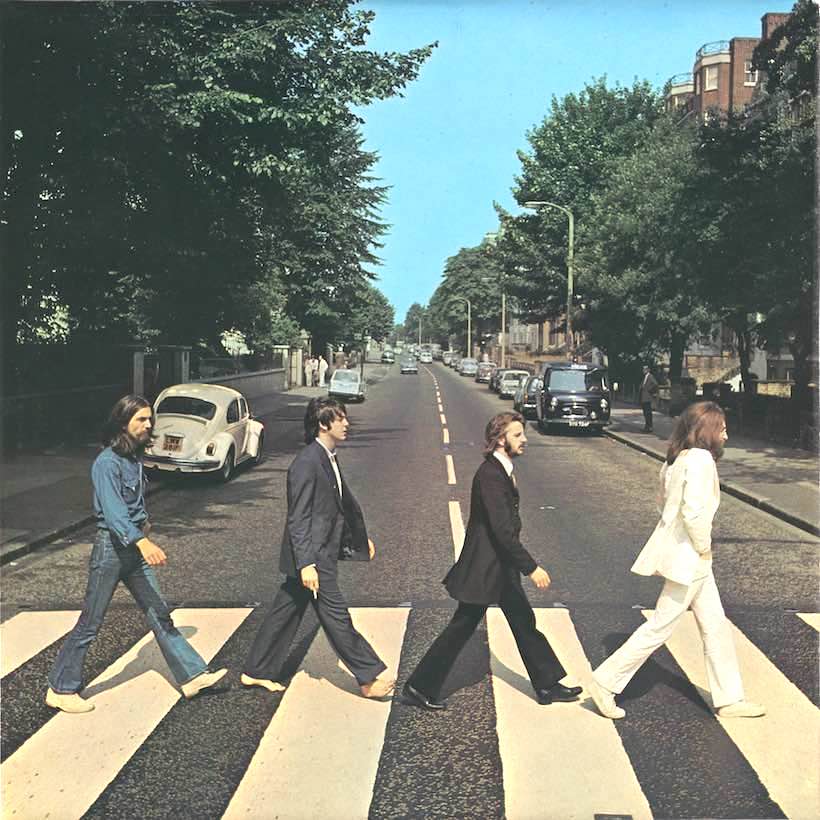 At Abbey Road Institute the album is a featured part of the curriculum that looks at key moments in recording history. Programme Director Carlos Lellis remembers first hearing the album as a little kid. ‘I experienced The Beatles in chronological order so I heard albums like Please Please Me and Help first. I had the red compilation LP which featured a lot of their early work. One day I went to someone’s house with my parents and they were playing the blue compilation LP which has ‘Something’, ‘Here Comes The Sun’, and ‘Come Together’. I was blown away and used my lunch money to get Abbey Road so I could hear the album where these great songs came from.’ In regards to favourite songs, Carlos finds ‘Here Comes The Sun’ as a particular highlight.

Carlos explains we look at ‘Here Comes The Sun’ in the curriculum as a time signature and song structure analysis. I feel that previous contributions from George were heavily Indian influenced songs that were pushed onto a pop album. With ‘Here Comes The Sun’ I think he perfectly incorporated his Indian influences while still writing a pop tune. The way the time signatures shifts is remarkable, I don’t think people are aware of how much it changes throughout the song. ‘Come Together’ is another song we look at in the course when we remix a cover version of the song. The production of the album has the ability to remain particularly modern even though it was recorded 50 years ago. Other albums from the ’60s feel like they were done in the ’60s but Abbey Road is different. It is incredibly high fidelity and sounds fresh today. I think George Martin was at the peak of his production powers and The Beatles were peaking at their instruments.

Not only is the album a staff favourite but students turn to it for inspiration as well. To celebrate the final week of his studies, student Thomas McConnell decided to ‘go out’ in a similar fashion to The Beatles by recording the Abbey Road medley in our studio. From ‘You Never Give Me Your Money’ to ‘Her Majesty’ we feel Tom has done the boys proud by capturing the magic of the Beatles seminal album. Check it out here:

Tom, tell us about discovering the Abbey Road album.

Abbey Road might be one of the last ones I heard. I became obsessed with all the albums when I was about 7 and I knew the big songs on Abbey Road around that time. However, my earliest memory of it as an album is listening to the medley every night in bed on my little 1GB MP3 player when I was about 10.

Why did you record the medley? What was the most challenging part

I recorded the medley for fun and couldn’t think of a better way to end my year at Abbey Road Institute! We only had a week left of the course so I quickly did it in my last 4/5 sessions. I was initially thinking of doing my own take on it but my Beatles-bug kicked in so I did it as accurately as possible. The biggest challenge for me was the drums – I’m not really a drummer but I can do a passable Ringo impression. I think I got the right feel with the fills on this so I was really happy with that.

Writing/production-wise are there things about the album that have influenced your songwriting and production?

Production-wise it’s very contemporary, it sounds like a ‘70s album done before the ‘70s. The immersive quality it has, especially the medley, has really inspired my productions. I love songs that sound like little film soundtracks. Again, the songwriting is incredible on this – the way the medley is constructed is so clever. ‘You Never Give Me Your Money’, in particular, has inspired my songs where I try and do a couple of tunes in one track.

Favourite song on the album and why?

It’s too hard to pick a favourite but I’ll say the medley as a whole as it’s a huge part of my life. The way it’s put together is so brilliant. As I was recording it, I realised how random the subjects of the songs are – a song about business troubles, a few tracks about unrelated surreal characters, a poem from 1603 and their final encore, ‘The End’. There’s no obvious theme at all – it’s completely surreal yet it feels so meaningful and I love that about it.

To celebrate the 50th-anniversary producer Giles Martin and Sam Okell have masterfully completed a new mix-down of Abbey Road. It brings new life into a classic album and provides a 21st-century gloss to the recordings. Giles introduces the album by explaining ‘the magic comes from the hands playing the instruments, the blend of The Beatles’ voices, the beauty of the arrangements. Our quest is simply to ensure everything sounds fresh and hits you as hard as it would have on the day it was recorded.’ The album was surely built to last and will likely spend another 50 years inspiring music makers, educators and producers.

Find out more about the new mix of Abbey Road in this interview with Giles Martin.

Students take part in Antelope Audio Microphone Contest
Five takeaways from the Song Production Masterclass
Categories
Book A Tour
Fill out the form below to visit our campus and studios.
Recent posts
06/12/2021
Scoring films with Spitfire Audio's library and Abbey Road One
Read article
19/11/2021
Dolby Atmos | Everything You Always Wanted To Know
Read article
10/11/2021
Abbey Road Amplify: How To Build Your Career As A Producer Or Engineer 🎥
Read article