Less than a year after graduating, Andrew has hit the ground running in the audio industry. We first spoke to Andrew while he was still a studying at Abbey Road Institute. Less than a year later, Andrew now juggles being an Audio Producer for the Royal National Institute of Blind People (RNIB), producing for other artists and working from his own studio. So we thought we’d reconnect and see how his time with us prepared him for a full-time career working in sound.

You finished the Advanced Diploma last year, what were your first thoughts after graduation?
When I left it was like the cutting the umbilical cord in some ways. At the graduation my band got to perform in Studio One, and that was great. After all that though I thought “Crap, I have to make some money now!” (laughs)

But you’ve been working, and in sound?
I’ve been doing freelance work ever since I left, working with various artists like Kathryn Williams and Astrid Williamson (both on Bjork’s label One Little Indian). My work with Astrid actually started when I was still a student. I knew I had studio time so I just asked her if she wanted to come and record some demos.

How did you end up producing her album?
After I finished, I gave her all of the files. I was really into her music and I could kind of hear where it was all going, so I asked her if I could do a couple mixes for her. She loved them and asked me to produce the record. And I was like “Yeah!!” So we’re doing a 10-track album, it’s all been recorded. We recorded the drums in a studio in Eastbourne, and the rest in my home studio.

So, you just…asked?
Yes. Abbey Road Institute has really opened up a lot of doors. I started to think outside of the box while I was studying there. I started contacting musicians that I really admired, just letting them know I had studio time. I recorded two of those musicians; Terry Bickers (The House of Love) and Pete Fijalkowski (Adorable). Terry was the guy who made me pick up a guitar in the first place. 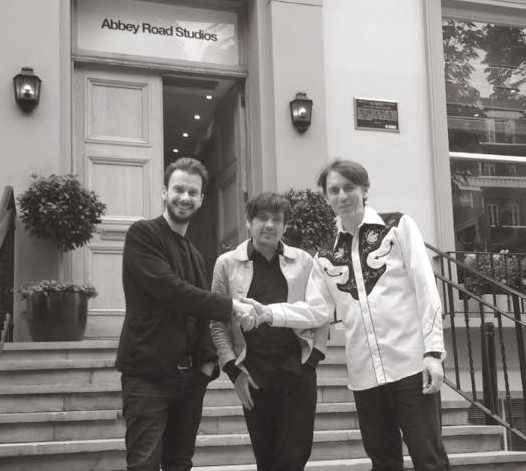 How did you get involved with the RNIB?
Working with Astrid is just one project. You’ve got to keep the fire burning, and muster up more work. I applied for a whole range of jobs, but ultimately I just wanted to be doing sessions. I had recorded audio books before; my wife is a novelist and it’s something I am interested in. The RNIB Audio Producer job came up and I thought it sounded good. It gives me the flexibility to work on music production in the evening.

What do you do there?
I’m running sessions on a daily basis. They have a talking book service for their blind and partially-sighted subscribers. I’m making production decisions about character voices and thinking of how the book is going to be heard by the listener. I’ve got a certain amount of freedom in that. I’m doing all my editing on the fly using SADiE, which is used at Abbey Road Studios for mastering. I also do a lot of newsagent stuff as well which is a little bit like a podcast; a condensed version of the content in magazines. Once everything is recorded, I frequently do my own mastering in-house. It’s great because I’m creating the content and seeing it through to the end as well. It’s post-production, producing and engineering all in one.

Can you share some advice on finding work after graduating?
There’s no gold at the end of the rainbow. You’ve got to ask yourself why someone should employ you. What do you bring to the table? You might be really good at one thing, but there will always be someone that’s better than you. You have to find what your unique selling point is. I think that’s true of all artists, which is what I see myself as. You have to align yourself with what they are asking for and I think the training at the institute really does stand up to what is being required of producers and engineers in the field.

I also think you need some imagination and look at the bigger picture. Set yourself some goals that you can actually work towards achieving. You need to stand back and look at the trajectory of what you’re moving towards.

What about advice for students who are just about to start the Advanced Diploma?
The course is really what you want to make it, and I think anything is possible. Okay, you might not get Ed Sheeran to come down and do a session…

You never know…
Well I did hear that Steve Diggle (Buzzcocks) came to record with a student recently! No, you don’t know. Sure you’ve got a daily lecture and you’re cramming a lot of information into one year but once you’re at the point where you’re putting all your skills into practice, anything is possible.

So what are the next goals you’ve set for yourself?
Well I built and designed my own home studio with a control and separate live room just before I started at the institute so I’m putting that to good use with different bands and other freelance projects. Other than that, I just hope that one day I can buy Carlos a cappuccino. He always said “If you ever get a hit record, then buy me a cappuccino”. So I’m holding out to buy him a cappuccino.

Ready for a full-time career in sound? Check out our Advanced Diploma in Music production and Sound Engineering, or contact us for more information.

Meet our new Student Administrator!
Why music producers should learn music theory, and why we insist on it
Categories
Book A Tour
Fill out the form below to visit our campus and studios.
Recent posts
14/06/2022
Hans-Martin Buff | Meet The Producer
Read article
16/05/2022
How To Get Started Recording Drums
Read article
30/03/2022
Celebrating IWD 2022 with Abbey Road Equalise at Angel Studios
Read article