From software development to musical impact

What do musicians and programmers (software developers) have in common? More than you might think! Meet John Butcher, student at Abbey Road Institute London with an important mission: he wants to make something that hasn’t been done before.

Now we hear you thinking: “Isn’t that what every artist or music producer wants to do?” Many do, however, John takes it from a different perspective. His primary focus is not the apparent job in music, like the artist, engineer, producer, songwriter, manager or studio owner, to name a few. And his background and recent involvement in both the Abbey Road Hackathon and the Audio Development Conference will give you a bit of a clue.

About John
For several years, John, a Computer Science Graduate from Open University, was working as a software developer in central London. Even though he could put his knowledge and skills into practice within a dynamic environment, John soon realised he didn’t quite fit in and was, using his own words, “feeling detached from life”, being disconnected.

His love for producing music and playing the piano, guitar and drums lead him to our open day. Although he finds it hard to call himself a musician (he prefers a music enthusiast), we believe he is. He writes and produces his own tracks with touches of singer-song, electronic, classical and ambient music and is now studying at Abbey Road Institute London, bringing his music skills to the next level… and about to create something unique.

In November this year, the legendary Studio One at Abbey Road opened its doors for the first edition of a series of Abbey Road Red Hackathons *). For those not familiar with the Red concept; where Abbey Road Institute is the training ground, Abbey Road Red is the Studio’s open innovation platform since 2015, where collaboration, research, sharing knowledge and empowering the music industry all come together. John participated in this premier event. At first, as a volunteer because of his extensive background and his studio knowledge. But eventually, he ended up helping out several teams as an advisor, chatting with many industry people and music developers and got to examine groundbreaking technologies like Microsoft’s AI and facial recognition API’s with the experts.

*) You might ask yourself ‘Ehmm, Hackathon?’ No worries, we got you covered. As John explains: “A hackathon is basically an event where experts and developers gather together to try and build a prototype solution (or to prove an idea) to a given problem. This is usually done within a scope of 24 to 36 hours.” Now you know. 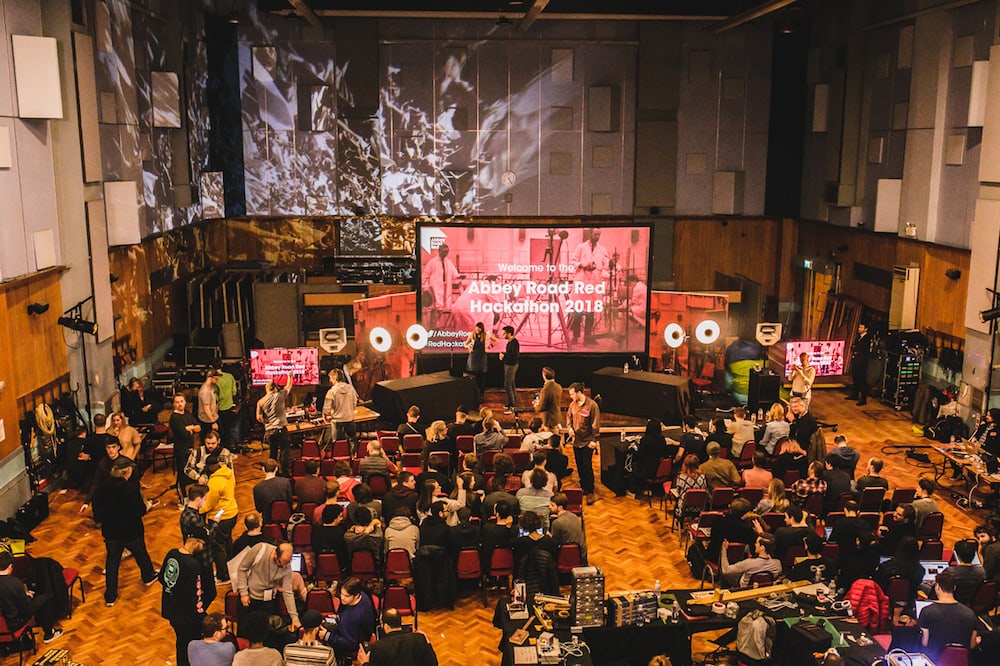 Rap battles will never be the same
“It was a real experience seeing so many creative people milling about in Studio One.” John reports. “Many were staying overnight either to develop away or find a corner for a few hours of sleep. We did some really cool stuff. I played handmade ‘instruments’ from Hackoustic , explored upcoming startups with Abbey Road Red and got to speak to a lot of developers and industry professionals working on brand new ideas, including PhD students and parttime fanatics. Seriously, it was great.” The Hackathon was based on the theme ‘Making Music In The Future’, where the participants were divided into small teams and got exclusive access to a load of different and very cool resources. Like Chirp, that offers data transmission through sound solutions, giving access to their API and code for the teams to work with in any way they wanted. Every team works on their project and in the end, there are winners.

“One of the projects that went on to win was an AI that could compete live in a rap battle with a human. They had a few challenges with the AI getting far too extreme and making threats” John reports laughing, “but they well deserved the prize, and it was hilarious to see if a little terrifying.”
A list of projects and winners can be found here.

“Not long after and due to my involvement with the Hackathon, I got to go to the Audio Developer Conference in central London. 3 solid days of networking with other audio developers, meeting people from companies like Roli, Arturia, InMusic and AudioKit, with a huge variety of talks and presentations, all going on at once. The event was organised by JUCE. I already bumped into their developers during the Hackathon, and it was great to meet up with them again. JUCE is part of ROLI (developer of the Seaboard), which is basically a powerful (software) code framework that is widely used in the industry. (For example, MAX MSP is built from JUCE). The first day we build a synthesizer using their framework.

I guess you understand how excited I am, getting to go to these conferences and meet all the people that create these tools. It’s pretty amazing. And after the event, I ended up getting contacted by a couple of companies with requests for my CV!” John reports vibrantly. “It has been an amazing week for me.” 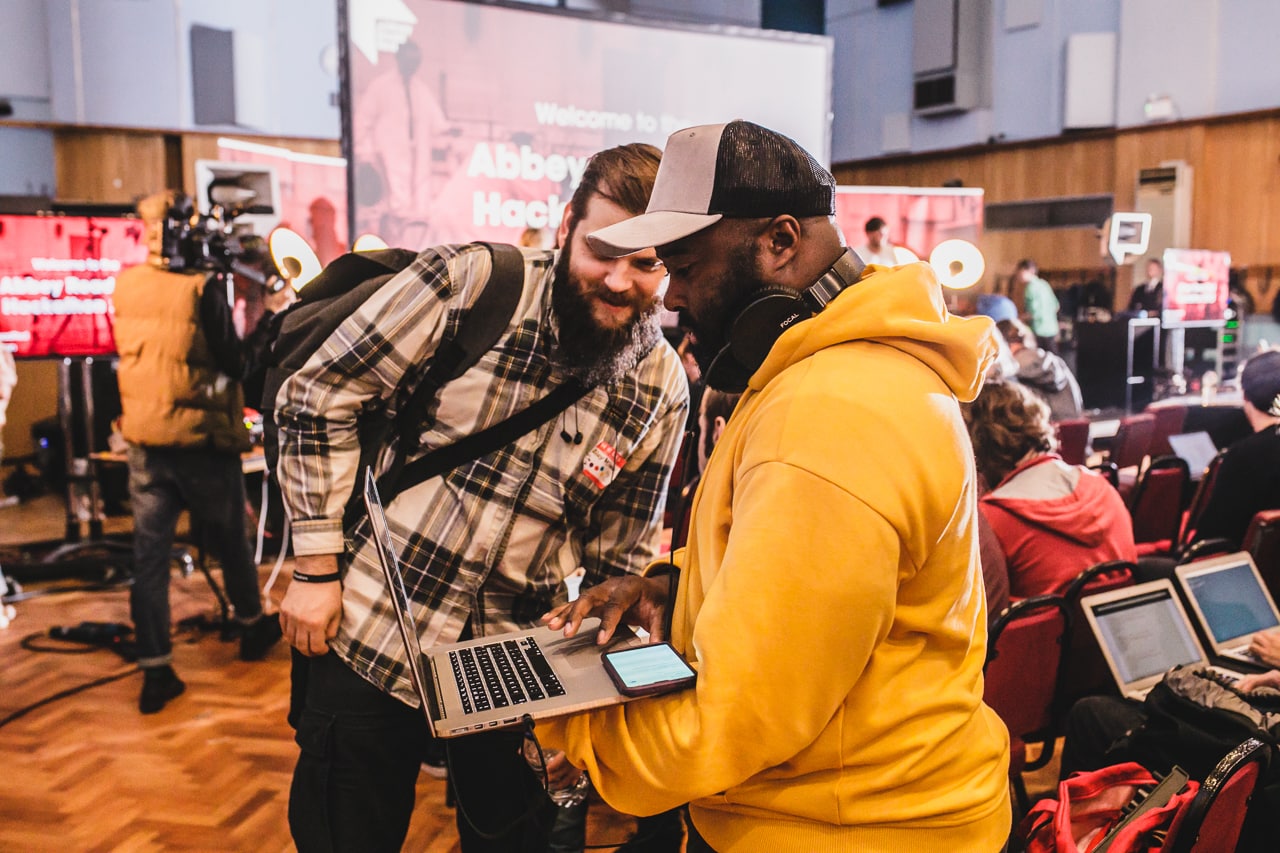 The future of making music

We live in an exciting new era for the audio and music industry. With countless new job opportunities on the horizon where the only limit is your imagination and commitment. Therefore it’s wonderful to see these kinds of developer events happening and growing and people like John getting involved. Since it’s not a very usual change in someone’s career path, we asked John how it is for him, with his background, to get into music and study at Abbey Road Institute London: “I love making music, it’s a real passion for me. But I had no formal music education. The feeling for music has always been there and very strong. Now I want to expand my skills and be able to put that feeling into words. It’s really cool to be around here, everyone is knowledgeable, helpful and supportive. This is your perfect network for life. I’m hoping to be able to combine my knowledge of programming with my love of music this year, and wish to get involved with creating the music tools we’ll use on a regular basis.”

(text continues under the picture) 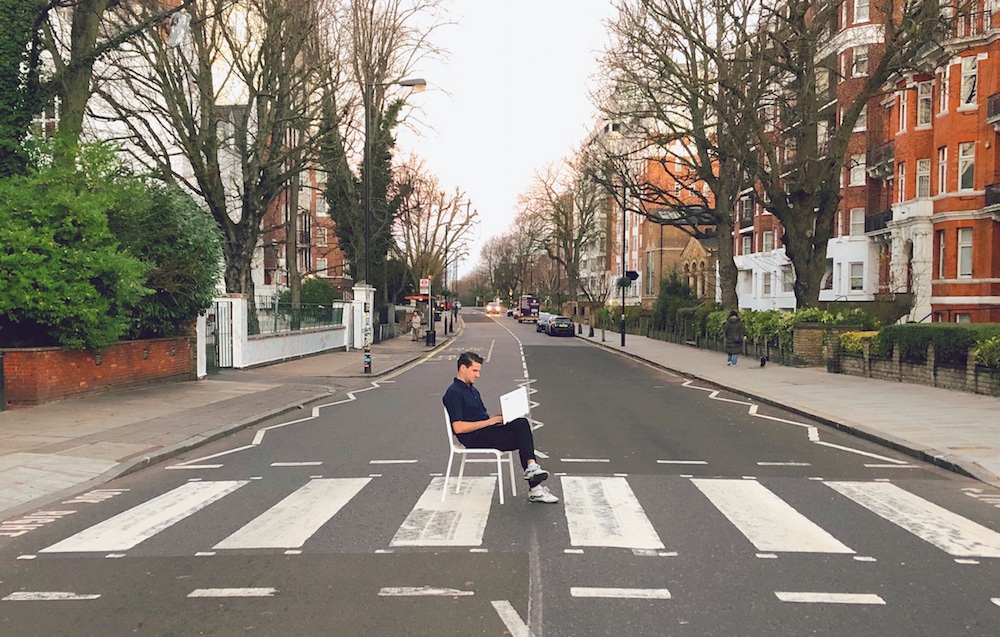 John Butcher at the Abbey Road

And do you feel ‘connected’ again?: “I really believe that musicians and programmers are very similar,” John replies. “They both are inventing solutions and are incredibly creative to reach their end. I know it might sound a bit poetic, but they both pull ideas from their imagination, literally inventing them, creating new worlds. It’s up to them how they’ll answer the call. The funny thing is that when I explain this to my programmer and/or musician friends, they respond by saying that they are nothing like ‘them’. But I believe they really are. So yes, I feel totally connected!”

What’s the future of making music according to you? “We already see that music making is becoming much more accessible and feasible. You can do it all on your own and at the same time collaborate with others using a vast variety of tools and solutions. But in the end, you can do it the way you want it, using different paths and yet with a sense of ownership and independence. And that’s my aim. Creating something that supports that and at the same time something that hasn’t been done before.”

John Butcher, we love your poetry and believe you can make an impact.
Thank you, John! We will be following your endeavours closely.

Global Graduation 2018 Video highlights!
Abbey Road Institute students awarded internship Down Under
Categories
Book A Tour
Fill out the form below to visit our campus and studios.
Recent posts
06/12/2021
Scoring films with Spitfire Audio's library and Abbey Road One
Read article
19/11/2021
Dolby Atmos | Everything You Always Wanted To Know
Read article
10/11/2021
Abbey Road Amplify: How To Build Your Career As A Producer Or Engineer 🎥
Read article