KEEMOSABE is a Pop/Rock/Funk/Experimental Italian quartet currently based in London. Their project was born from the desire of two jazz students in New York City, Alberto Curtis and Sebastiano Vecchio, to form a band that could implement concepts from different musical genres. After meeting Pino Muscatelli, an Italian rock session artist and Andrea Guarinoni, a soundtrack composer/producer and Abbey Road Institute student, the music that derived is a hybridization of various musical landscapes, enriched by deep grooves, heavy riffs and pop melodies. 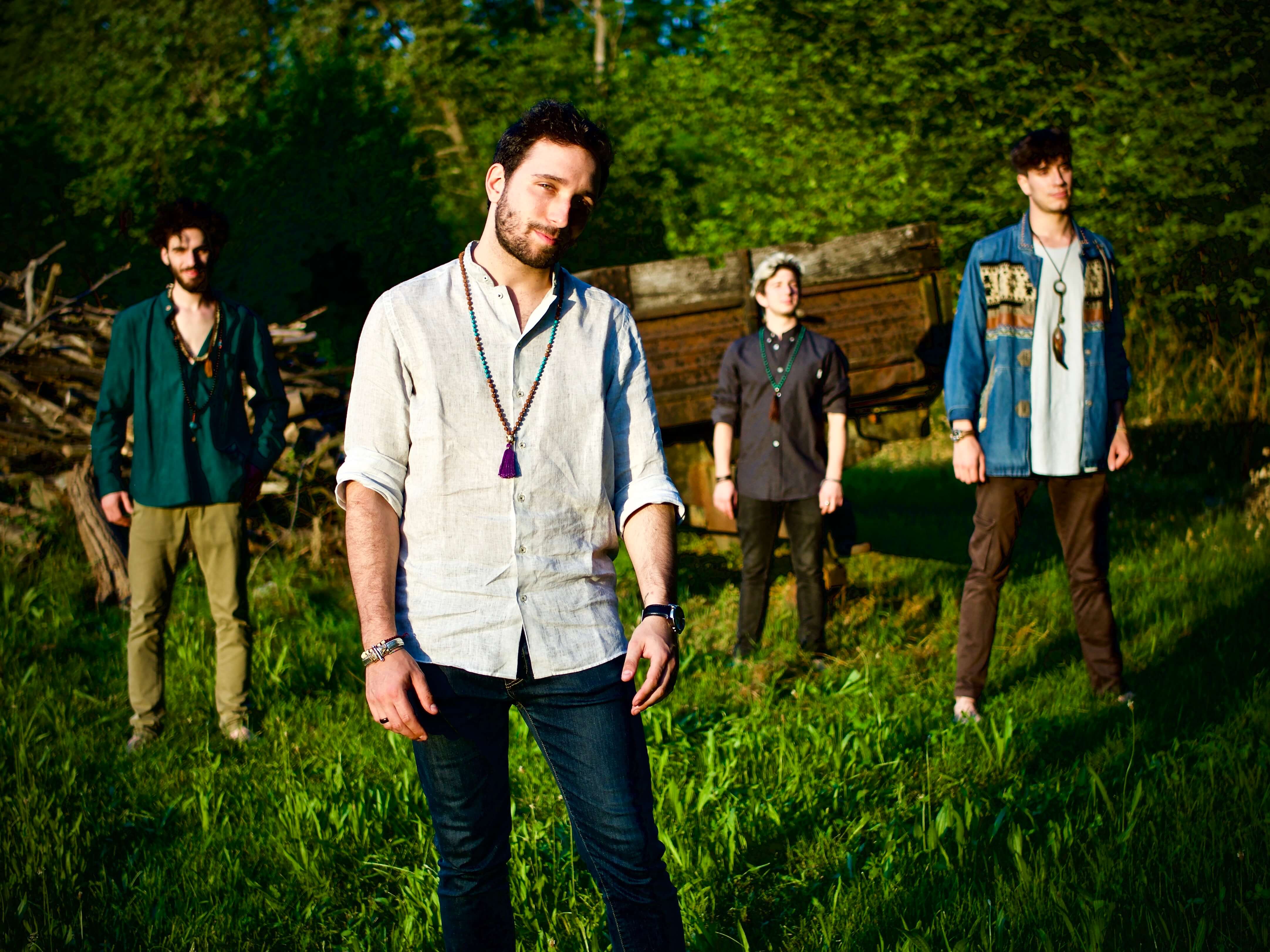 Hello KEEMOSABE, nice to meet you all. Thank you for coming to Abbey Road Institute.
Can you tell us about the band and what your plans for the future are?

We decided to take our career to a further level and moved to London in September 2016, where we are currently performing and recording with other artists regularly, as well as cultivating our musical education: Andrea is studying Music Production and Sound Engineering at Abbey Road Institute and Alberto and Sebastiano are graduating from a Master’s Degree in Music Performance at ICMP London.

We started to compose and record our first demos during last summer, in a home studio in Italy, lost in the woods of the Italian countryside. This helped us in shaping our musical vision and identity that deals with re-connecting human beings to nature. Nature has opened our hearts, quieted our minds and transformed our creative imagination. This is what we want you to experience with our music!

We firmly believe that moving to London was the best choice for our band. As a matter of fact, in a few months we made so many professional connections with important people from the music industry and we had phenomenal opportunities to perform in amazing venues and crowded festivals. But, above all, living together in the same apartment, rehearsing four hours every day, having fun writing music on a daily basis and working together as a band, created a deep and sincere bond between us. We are sharing 100% of our lives since we moved here. As a result of this, we honestly think that KEEMOSABE has found a great cohesion and all its band members share the same positive musical vision and mission.

Our plans for the future include the release of three singles by the end of the year. We are currently working on the pre-production of the tracks and planning to record, mix and master them in Abbey Road Studios. This is the one of the reasons why we just launched a crowdfunding campaign on Kickstarter!

Tell us more about your Kickstarter campaign.

We are trying to raise 5000€ with a Kickstarter campaign. First of all, this will allow us to have a professional studio recording, mixed and mastered by world-class Abbey Road producers/engineers, which can help us in having three singles out on every music platform, radios, and playlists in order to spread the word about our music.

On the other hand, we firmly believe that live music is still one of the most powerful ways of conveying a message and one of the most exciting experiences in human life, and this why we are asking for your help to improve our live shows. We want to play our music live at its best level, and we want YOU to come to our shows and enjoy the music, the vibe and the energy at the highest level that we can possibly transmit to you, in order to make it a fulfilling experience.

The Kickstarter project is two weeks old now and we had an incredible and totally unexpected response! We feel really surprised and thankful and this crowdfunding experience confirmed us that people still believe in music. It is priceless to see how people can gather and take an idea they believe in, out into the world. 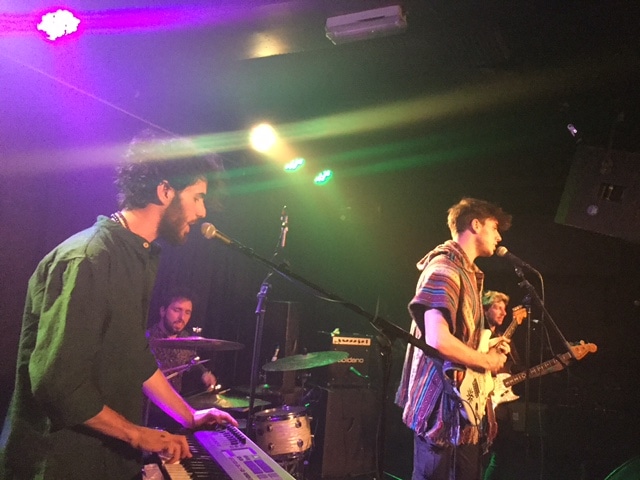 You mentioned that the reason for the Kickstarter project is to record three songs in the Abbey Road Studios. Tell us more about the relationship with Abbey Road.

It is the home of countless landmark recordings and technological breakthroughs, and has played an integral role in the evolution of modern music.
We chose Stefano Civetta as our sound engineer. We met him during our first months in London and we fully trust his musical vision to achieve the best out of our compositions. He has worked with major pop and classical acts including Mary J Blige, James Bay, One Direction, Earth Wind And Fire, Andrea Bocelli and the BBC Orchestra.

Straight after the mixing of our EP, we will proceed with the mastering in the Abbey Road facilities. We would love to work with Alex Wharton. He has mastered albums and singles for some of the biggest acts in pop, rock and dance worldwide including The Beatles, Radiohead, The Pixies, Marvin Gaye, Coldplay, My Bloody Valentine and The Chemical Brothers.

We are well aware of the professionalism of each worker in the Studios, and we have experienced  for ourselves why Abbey Road is still considered the best recording studio in the world. In fact, we recently had a recording session with the Advanced Diploma students from Abbey Road Institute in May in the historic Studio Three at Abbey Road. We were collaborating with Electronic/Jazz artists LEWN. It was memorable and by far our best experience in a recording studio. Tim Wetter, young and talented Hip Hop producer, was leading the session. Jack Lewin (from LEWN) and Tim Wetter are also studying Music Production and Sound Engineering at Abbey Road Institute.

As a result of this, we truly understood through our own experience why we are ambitious to record our debut EP at Abbey Road Studios.
We would love to show our deep appreciation to Abbey Road Institute, the training ground for the next generation of music producers and sound engineers and above all to the maestro Carlos Lellis. Collaborating with you guys has been an extraordinary accomplishment and we really hope to keep working together in other future occasions!

Thank you KEEMOSABE. We wish you the best of luck for the last two weeks of your Kickstarter campaign and hope to see you back soon at Abbey Road and of course at Abbey Road Institute.

Are you interested to know more about KEEMOSABE’s kickstart campaign? We’ll be keeping you posted over the next few weeks with their pursuit to record their songs at Abbey Road!

To innovate in the future is to learn from the past
Our latest recording session with our students at Abbey Road’s Studio One
Categories
Book A Tour
Fill out the form below to visit our campus and studios.
Recent posts
09/08/2022
The Art of Sampling In Music
Read article
01/08/2022
Global Graduation 2022 at Abbey Road Studios | Video Highlights 📽
Read article
26/07/2022
Abbey Road Institute Graduation Ceremony 2022 | Photo Gallery
Read article