Back in Studio Two 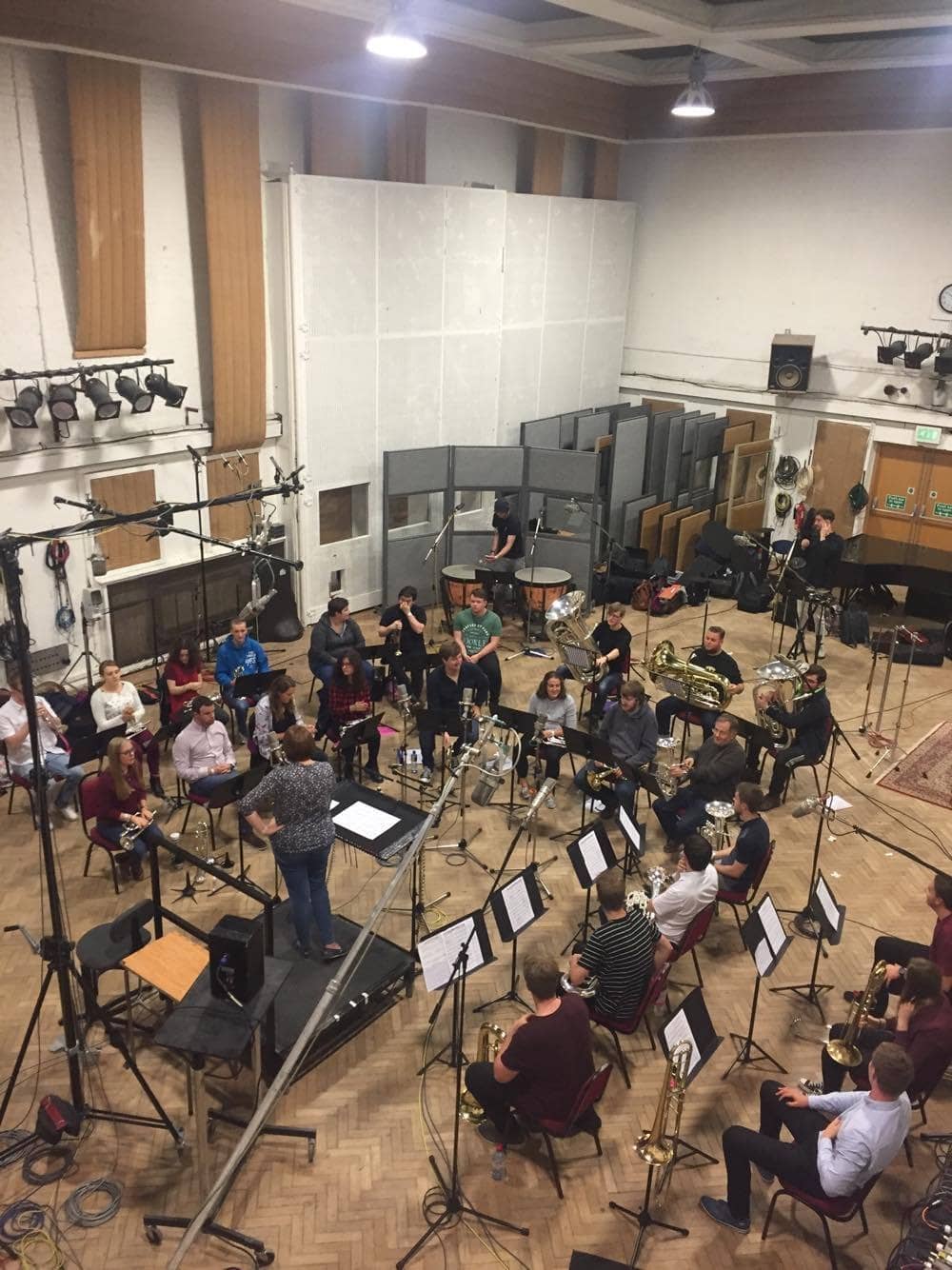 It was an early start for our most recent recording in Abbey Road’s Studio Two. Programme Director Carlos Lellis, engineer John Dunkerley and co-producer Chris met our students first thing to set up the session with Chichester University’s brass band.

The band arrived at 10am. John, Abbey Road Studios’ engineer Stefano Civetta and alumnus Chris took their places in the control room. This was Chris’s second recording session as co-producer in Studio Two. Our students observed and discussed the musicians seating plan and studied the scores together with Carlos to prep for the session. Carlos explained the importance of the careful placement of both the musicians and microphones. Throughout the session, the class moved between the live room and the control room to gain an understanding of the sound the band produced and what was captured. 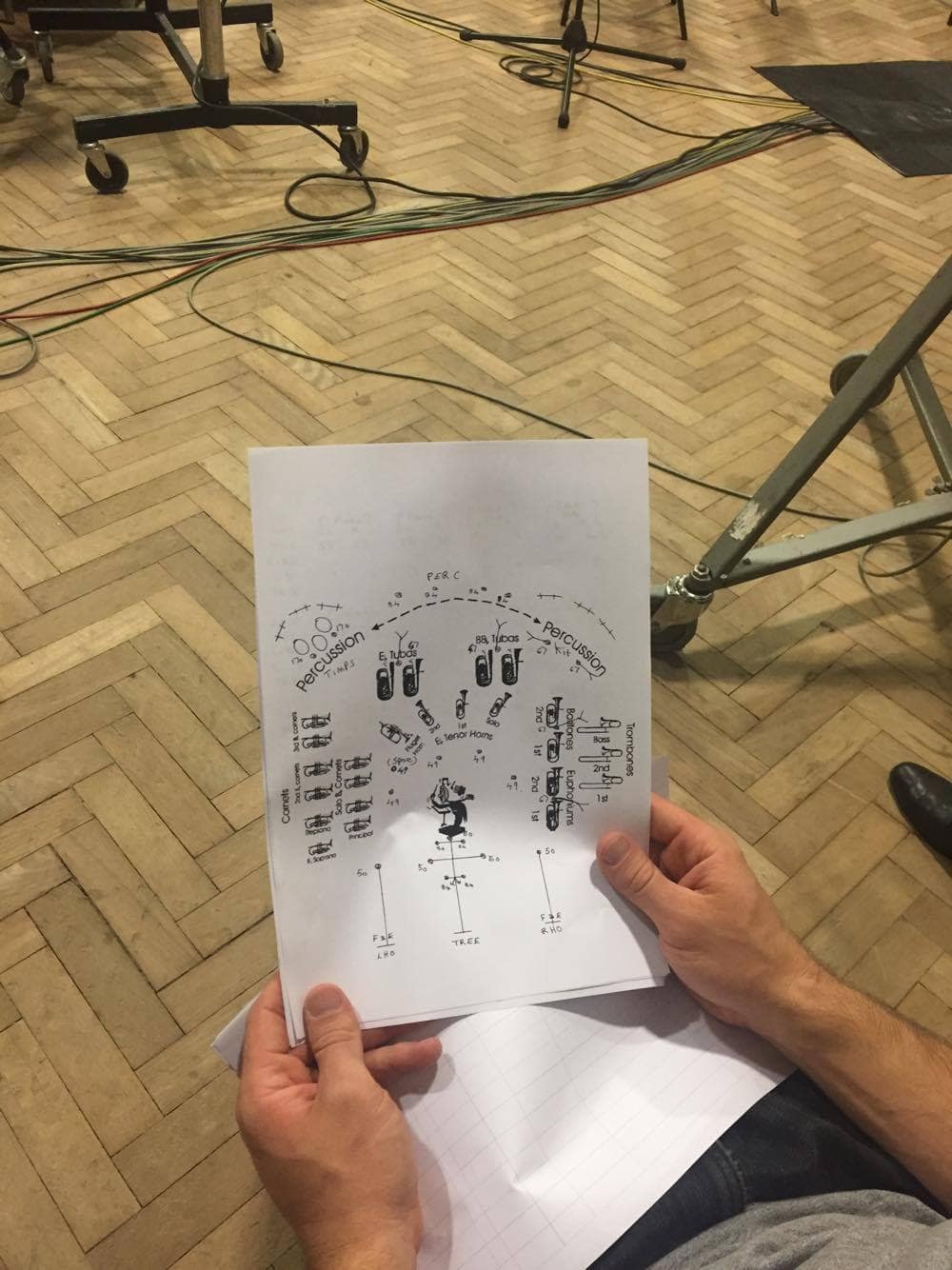 Between sessions, John, Stefano, and Carlos changed the setup from recording a brass ensemble to solo violin (Lisa Ueda) and piano (Daniele Rinaldo). The afternoon session focused on the Sonata for Violin and Piano No. 9, in A minor (The “Kreutzer”).

Student Sergiu is a highly skilled and experienced pianist and was hands-on in assisting pianist Daniele during the session. Throughout the day, as with the brass band recording, the students moved between the control room and live room to develop their understanding of the recording process. 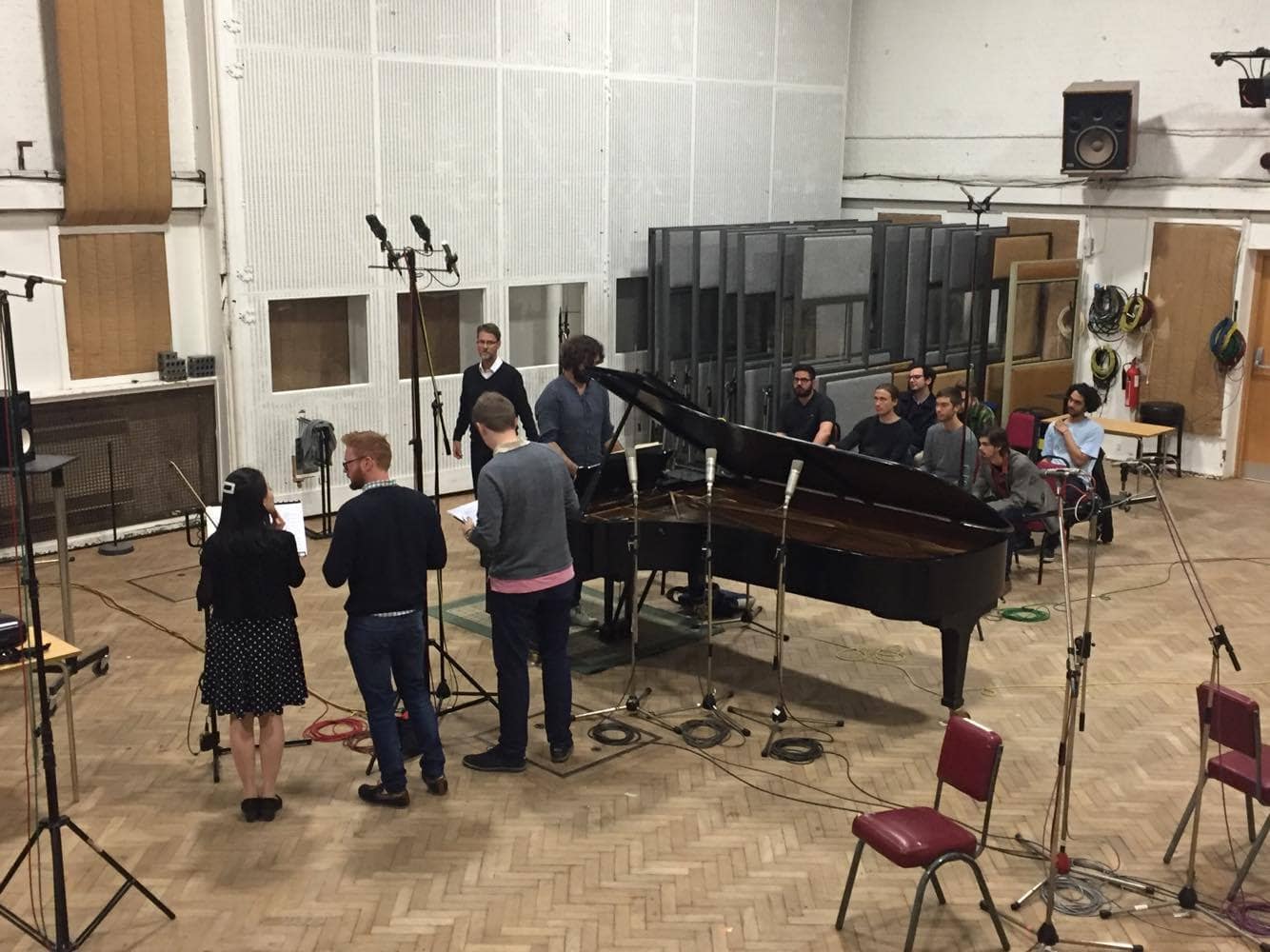 End of the day

After four hours of recording in the afternoon, all passages of music had been recorded and the necessary notes were made on each take. Carlos had invited our new September class into Studio Two for a surprise induction. This was an exciting first for the group, Carlos gave a tour and snapshot of the history of Studio Two. During this time John Dunkerley reviewed the session with the students involved in the day.

Following on from the recording session the class will receive a copy of the Pro Tools session for editing before meeting with John to go through the mixing stage. 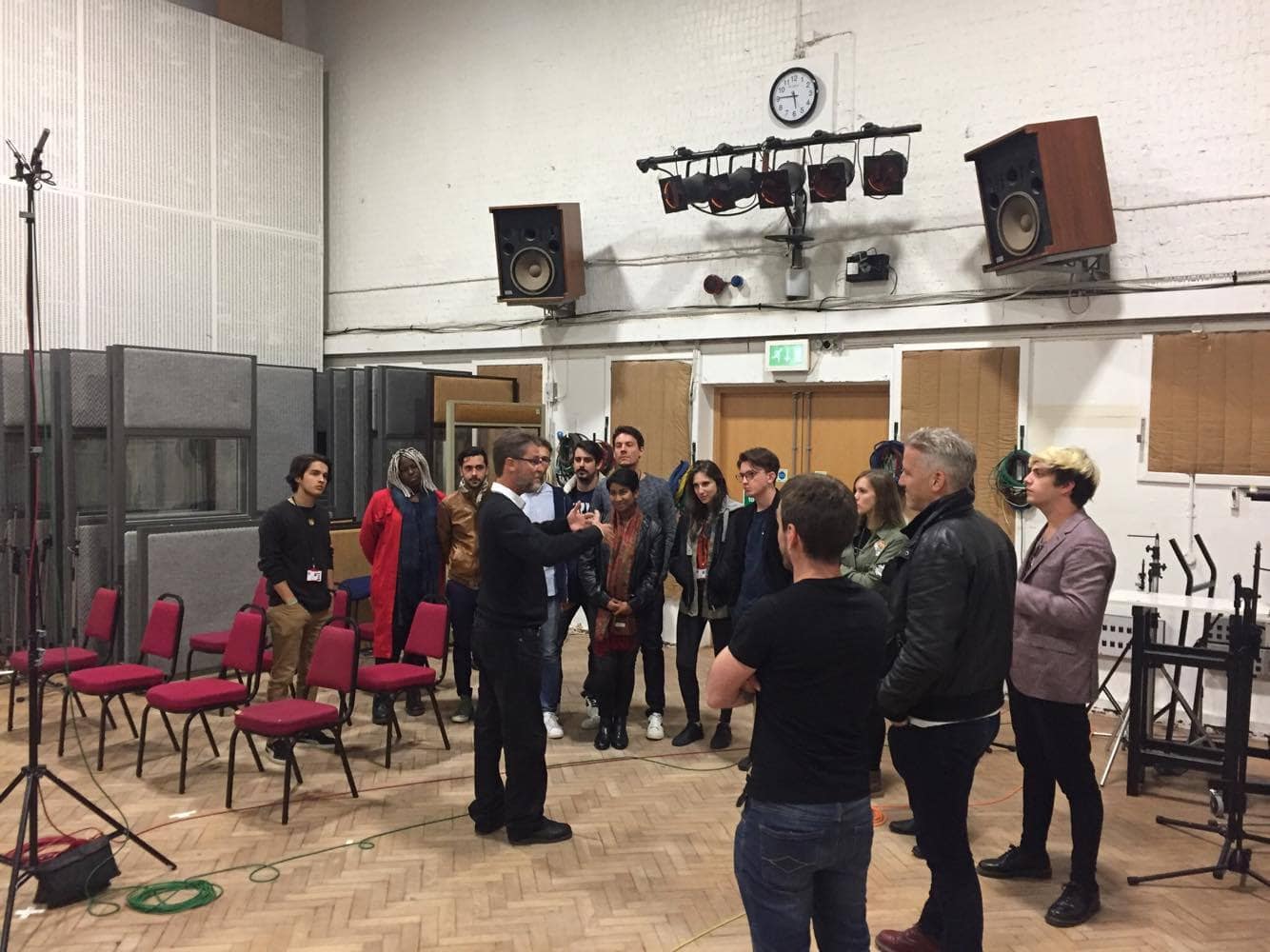 Carlos Lellis with our new students

Alumni Chris Cook shares his thoughts on the session

‘It was another amazing experience working alongside John in Studio Two. Both sessions ran extremely smoothly giving us enough time to fine tune all sections of the music. The preparation involved before each session allowed us to work quickly and efficiently between takes. This was my first recording of a brass ensemble. It was interesting to learn about the microphone choice and placement. Neumann M50’s were carefully positioned as part of the Decca Tree (these are omnidirectional microphones that pick up sound from all directions, however, become more directional at the higher frequencies). Not only did the day help me to work on my production approach and how to deal with different situations but it also provided the opportunity for the brass band from Chichester University to see how a recording session is set up and run.’ 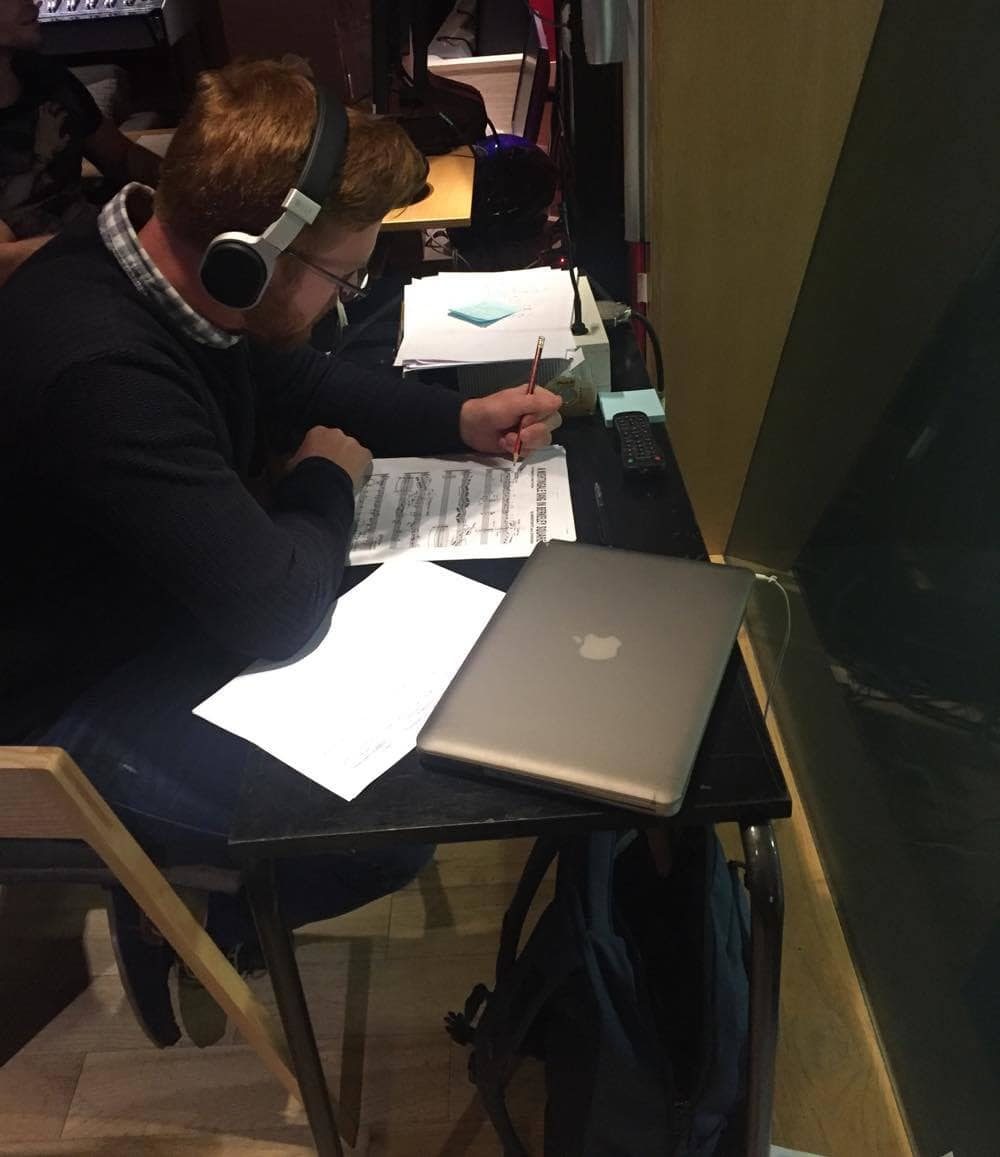 Could this be you?

If you would like to be part of this learning experience you can apply now for our next Advanced Diploma in Music Production and Sound Engineering which starts in March 2018.

‘Not a second in the studio is wasted’ Interview with Haydn Bendall
From Ottawa, Canada to Abbey Road
Categories
Book A Tour
Fill out the form below to visit our campus and studios.
Recent posts
14/06/2022
Hans-Martin Buff | Meet The Producer
Read article
16/05/2022
How To Get Started Recording Drums
Read article
30/03/2022
Celebrating IWD 2022 with Abbey Road Equalise at Angel Studios
Read article